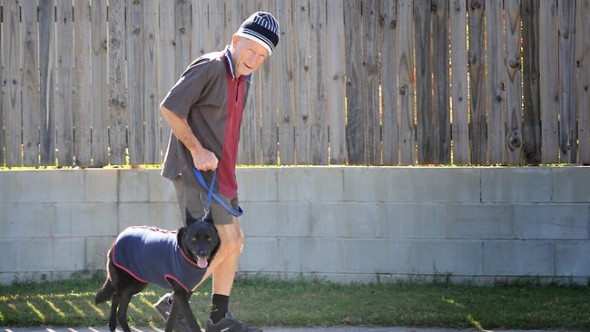 When Brian Railton’s dog Benji went missing, the elderly man was determined to find him.

On March 24, a storm rolled through south of Brisbane, Australia, and spooked the kelpie-border collie from his yard.

Every day since, the 70-year-old man, who suffers from Parkinson’s disease, would walk with his son, Malcolm, to the city council’s animal management center in hopes of finding his dog. Brian and Malcolm hung posters and searched tirelessly for Benji.

“We were nearly at the point of giving up; we were talking about getting another dog because it was very stressful for dad,” Malcolm explained.

Walking with Benji helps relieve the shaking from Parkinson’s, and they would walk about 12 km (7.5 miles) each day. The loyal dog, who is microchipped, would wait by the bus stop when Brian would go to the shops.

Just as Brian and Malcolm’s hopes of finding Benji were nearly extinguished, they received the phone call they had been dreaming of.

“I got the call from the pound and dad could hear me on the phone and was so excited to bring him home,” Malcolm said. “We had a celebration and took him to McDonald’s for an ice-cream and he stole half of dad’s as well.”

Benji had been found at a nursing home, where he had been going for dinner ever night for the past three weeks.