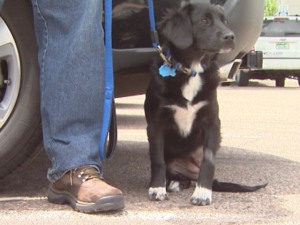 Jessie is a lucky pup. When she ran away from her pet sitter earlier this month she was found five days later in bad shape, having been hit by a train. Jessie is on her way to recovery, though she did lose one of her legs.

On May 13th Jessie’s pet sitter was trying to untangle her when Jessie took off. She was spotted several times but no one was able to catch her. Finally five days after she went missing Jessie was found by some Good Samaritans, but she was in bad shape.

“Her leg was just dangling from a tiny little piece of flesh,” said Jessie’s owner.

“I think that’s the only reason that she didn’t bleed to death, “said Vechten.

“I love her, she’s awesome, she’s such a good dog,” said her owner.