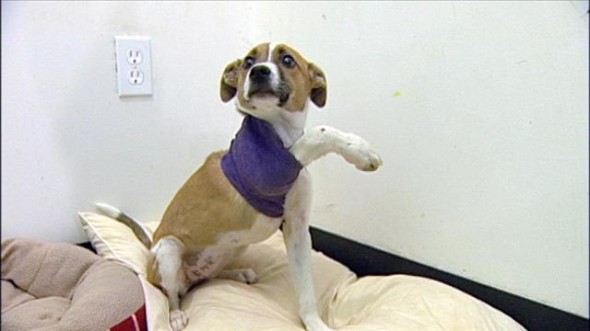 When elementary school students in Claiborne County Tennessee found an injured dog on their playground they not only helped get the dog to a vet, but are now raising the money for its care.

On Friday third and fourth graders at Tazewell-New Tazewell Primary were outside enjoying recess when a dog wandered onto the playground. She was obviously injured and students went to teachers for help. The teachers rushed the dog to the Claiborne County Animal Shelter where it was discovered she had a broken leg after most likely being hit by a car. “The shelter told us it looked like the dog was hit by a car and it would cost about $400 to save the puppy’s broken leg,” said teacher Erica Pressnell.

The shelter and the school both didn’t have the money to cover the cost, but the students wanted to help. “When the kids said they wanted to raise the money, we went ahead and based on that, scheduled her an appointment this afternoon to go to the vet in Knoxville and get her leg fixed,” said shelter director Liza Martz. The dog has been named TNT after the school that is helping to save her.

In the first day of fundraising the kids made it halfway to their goal of $400. They are also hoping to collect items for other animals at the shelter. They are hoping to have all the money raised by next Monday. If you would like to contribute to the children’s fundraising efforts you can send a donation to the school:

All additional funds raised will go to help other dogs and cats at the Claiborne County Animal Shelter.