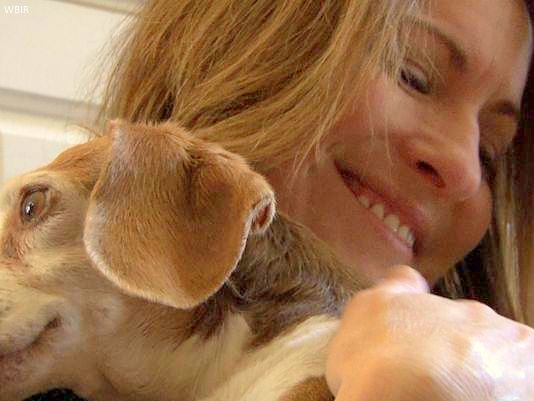 There is no denying the happiness Maisy is feeling as the smile appears on her face as she catches the first glimpse of her mom in nearly six years.  The beagle went for a walk with the family in the woods and disappeared, but thanks to a microchip she has finally been returned home.

After spending the last 5½ years missing their dog, April Helland and her family were overjoyed to be whole again.  Though so much time had passed, Maisy was still the same girl.

“She still does it, when you pick her up, she’ll just lay back like this and be so sweet,” April said as Maisy reclined on her shoulder.

When her son Parker was just four years old, he and his brothers went exploring the woods of their Hardin Valley, Tennessee home with Maisy tagging along behind them.  But she must have wandered off, because when the boys emerged from the woods, the beagle wasn’t with them.

“We started looking around the woods, putting up flyers, asking the mail lady, ‘can you watch out for a dog,’” Parker recalled.  “I just prayed all night, ‘God please bring her back.’ I just missed her so much.” 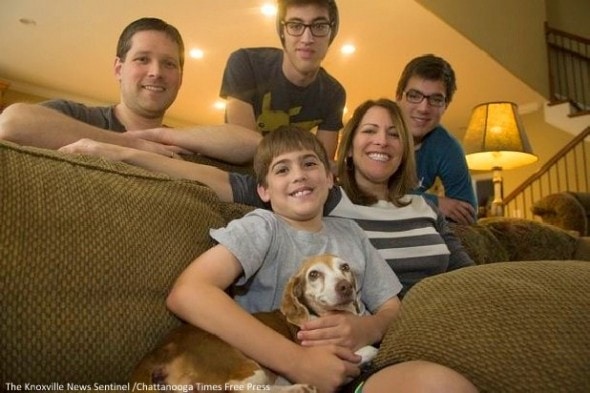 “It was like losing a member of the family,” said father Chad.  “When we put the flyers up looking for her, that’s what we put, lost family member.”

“I thought I would never see her again. Ever,” April said.

The family searched for her, but felt they needed to move on as the years passed.  They got another beagle named Cooper, but he was not a replacement for Maisy.   Just this past week, they received the call they had longed for:  Maisy had been found.

“It was probably the most shocking phone call I’ve ever gotten in my life,” Chad said.

Maisy had been microchipped, and the Hellands kept their information up to date, so when she was taken in by the Young Williams Animal Center, they knew just who to contact. 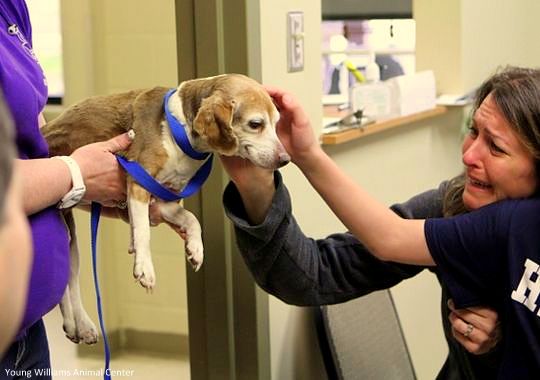 “It’s one of those things that just worked out perfectly. It’s the way it’s supposed to work,” said YWAC CEO, Jeff Ashin.

It was an emotional reunion for Maisy, the Hellands and shelter staff.

“When I saw her it was like everything just flooded back at once. It was like, that’s her! At first you kind of wonder are they right? Maybe this is an accident, maybe they made a mistake?  But it wasn’t,” April said.  “It was just so overwhelmingly emotional for me.”

The 12-year-old dog appeared to be well-cared for, and likely lived with another family and took off from them, too.  But now she will hopefully spend the rest of her life in her rightful place as a Helland.

“I feel so blessed to have her back. For my own comfort,” April said.  “I can hold her and tell her thank you for all those years that she was good to us.”