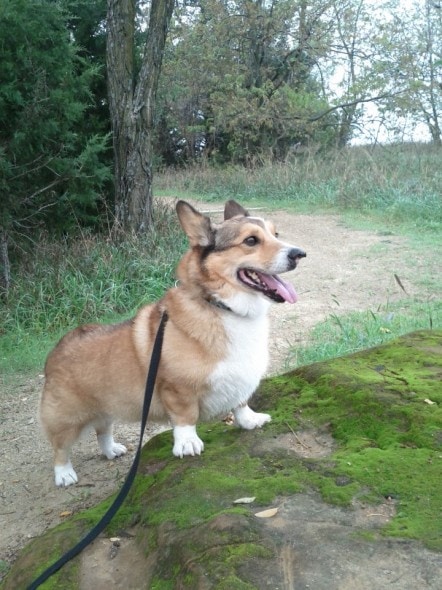 A dog that was rescued from a puppy mill in 2010 is getting some national attention this week as he is now a finalist in Petfinder contest to be named Luckiest Pet of 2013.  Benny is a corgi whose life was miraculously spared while 1200 other dogs were put down due to widespread distemper at an Oberlin puppy mill.

Benny Corgipants as he is known on Facebook, lost part of his nose and snout due to an untreated bite he received as pup.  “There were 1,200 puppies that were euthanized and Benny was supposed to be one of those,” said Peggy Medina, Benny’s owner. “He had been bitten on the face as a puppy and his injuries were never treated. He is missing half of his nose and a portion of his lip. One of the inspectors saw something in him and called Corgi Connection.”

Benny was about 5 years old when his life suddenly took a new turn and he found himself in a loving home with the Medina’s.   He had been on Petfinder but with his deformed nose it was feared he would not be adopted.  He now lives with 2 cats, who he tolerates, and another adopted Corgi.  He has gone from being afraid of every movement and sound to being a total people lover who demands that they love him back.

Benny is a finalist from over 4000 dogs entered into the contest and if he wins $5000 will be donated to Corgi Connection and he will get a $500 PetCo gift card for himself.  “We take in a lot of abandoned or homeless dogs,” said Jeanette DeMars, founder of Corgi Connection. “We focus on Corgis and place them in foster homes around the state. We have adopted dogs from coast to coast, north and south, east and west.  It takes a lot of money to care for the dogs,” DeMars said. “The adoption fees goes to cover some of the costs, but you don’t get your money back. The $5,000 would go a long ways toward keeping Corgi Connection afloat.”

If you would like to vote for Benny go to Petfinder Luckiest Pet Contest and cast your ballot.  This little guy and the shelter who rescued him deserve lots of votes.