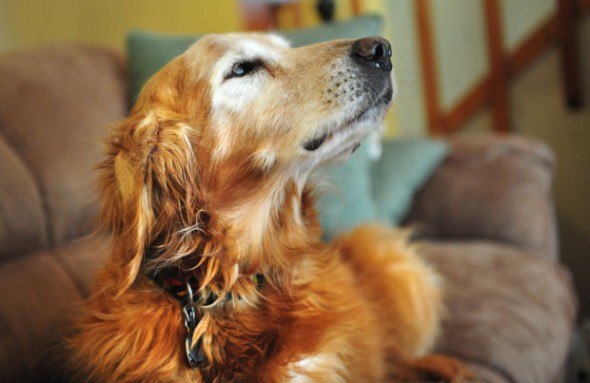 Some dogs will eat anything, shoes, garbage, toys, rocks, even money.  That is the case for Sundance, a 12 year old golden retriever from Helena, Montana who ate 5 $100 bills while his owners were on vacation.

The story began at Christmas when Wayne Klinkel and his wife drove to visit their daughter in Denver.  During a stop for dinner the Klinkels left Sundance in the truck, with the doors locked.  They also left some cash stashed in a cubby.  After dinner they returned to the truck, which was still locked and secure.  And there was Sundance sitting on the seat next to half of a $100 bill.

“Sundance is notorious for eating anything and everything, so right away I knew what happened,” Klinkel said.  “I thought ‘You dumb SOB,’” he recalled with a rueful laugh. “I couldn’t believe he did that.”  For the next few days Klinkel followed Sundance around when he was doing his business, knowing that paper doesn’t digest, and hoping to recover evidence of the crime.

“I pretty much recovered two fairly complete bills, and had some other pieces,” Klinkel said. “But it wasn’t nearly enough there to do anything with it.”  Then recently his daughter Amy came to visit, bringing with her a baggy of money, or bits of money anyway which her husband Coty has found in the yard after the snow melted.

“She said ‘Oh, Dad, look what Coty found in the back yard,’” Klinkel said. “She said they were shocked it hadn’t blown away. Good thing it’s a fenced yard.”  So Klinkel soaked the money in soapy water for a week or so and then painstakingly began to put it back together using tape and placing each bill in a separate plastic bag.  But what to do with the money then?

After several unsuccessful trips to banks, Klinkel was told that he could send the money, at his own risk and expense, to the Treasury Department’s Bureau of Engraving and Printing, along with a letter explaining how the currency was destroyed and the customer’s name and address.  “The Department of the Treasury sends a check directly to the customer when they deem the currency redeemable,” the bank policy stated.  Apparently the policy also states that if 51% of the currency is present is redeemable.

Klinkel did send the money in, with a letter explaining what happened, but he will have to wait up to 2 years for a response, and hopefully a check.  “Guess we’ll just have to wait and see what happens,” he said.  In the meantime, the Klinkel’s won’t be leaving cash lying around anymore.