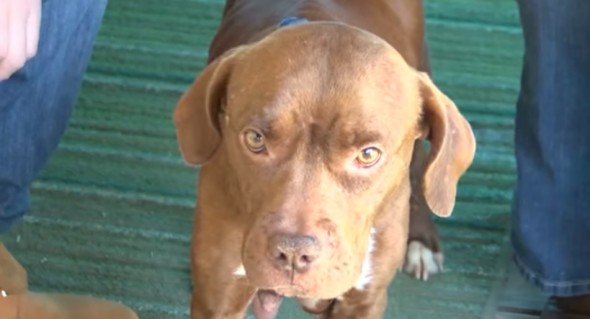 Nina Louise is a pit bull that had gone missing from her family back in 2013.  They never gave up looking for her, and one day, while watching a news broadcast, Nina Louise was found.

They were watching a television news cast.  A video of a raid being done on a home where suspected cockfighting was taking place.  As the video continued, someone noticed a very scared, and malnourished dog in the background.

It was April, Nina’s human mom, that noticed her first.  What dog mom could forget one of her dog children, right?  She got on the phone immediately, and contacted the local humane society.

Nina wasn’t in the best shape, physically or mentally, but she knew her family right away.  They couldn’t be happier to have their family feeling more whole again.

Nina is back with her family, and all because of a raid by the humane society, and a news broadcast.  In the time she was gone, Nina became mother to ten pups as well.  The family helped nurse everyone back to good health, and Nina’s pups are all going to be adopted out to forever homes.  Now that’s what we call a happy ending.