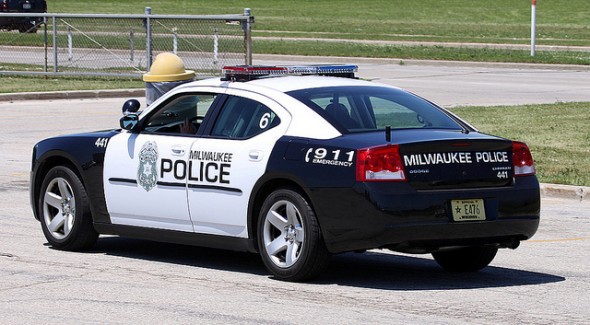 In Milwaukee, Wisconsin, police and other first responders are being put through special, improvised training to better deal with dogs when arriving to the scene of a call.  So far, things seem to be working as there have been fewer and fewer shootings each year.

This comes as a response to much outrage and criticism over the dozens of dogs killed, seemingly for no reason, and two lawsuits.

When Jane Flint was at work, a friend and neighbor called to warn her that police were about to search her home for endangered reptiles.  Jane flew home, but got there too late. She came home to find that two of her often boisterous dogs had already been shot by police, and Jane was never given a reason why.

“This didn’t have to happen,” she said through tears.

Michael Tobin is the executive director of the Milwaukee Fire and Police Commission.  He says that officers are eager to improve upon their actions and decisions when arriving to a call, and dogs are on the property.  He also says that even one shooting a year would be far too many, and the damage it does to relations between officers and the public is something that takes years to repair.

One of the suits filed is from Jane Flint, who is suing the city of Milwaukee and several police officers.  She believes that the 2010 shootings were beyond unnecessary, citing that her dogs were gentle and good natured even if they did bark quite a bit when someone they do not know comes onto the property.  This is something many dogs do not as a sign of aggression, so much as an acknowledgement to your presence in their home.

Jane was at first charged with mistreatment of animals.  Prosecutors eventually dropped all of the charges against her.

When asked, a police spokesperson said he couldn’t comment of the case, as the investigation is ongoing.

Between the years of 2000 and 2008, there were 434 dogs shot by police in Milwaukee, which works out to be about 48 deaths per month.  That information comes from another lawsuit from a woman whose dog was shot by cops in 2004 as they were looking for an unrelated man, alleged to be in possession of a pit bull specifically bred and raised for fighting.

Since then the stats are gettng much better.  The numbers dropped to 41 killed in 2009, and dropped again by 2012 where the number dropped to 28.  This is statistical data straight from the fire and police commission.

They are still working to a goal of 0 shootings per year, where there is pretty much a 0 tolerance policy.  Meaning you had better have one heck of a reason, such as your life, or the life of someone else is directly threatened.

All too often the claim is made by officers that it’s a case of mistaking behaviors as aggression when it is not the case.  Tobin has said that all incident reports will be heavily scrutinized, where officers will be held 100% responsible for their actions when interacting with the public and our furry four legged family members.

The training began in 2012.  All first responders will be trained that it is imperative that any and all violence against anyone, especially our dogs, is only to be considered and an absolute last resort, and any and all non-violent avenues have been explored.

While this is a marked improvement over past numbers, it is still far behind the New York City Police, where the improvised training has been a requirement for several years now.  In 2012 the number of dog shootings in New York by officers was 12. This number also comes with the caveat that New York’s police department is 18 times larger than that of Milwaukee, and they respond to nearly 8 times the number of calls Milwaukee receives where there is the possibility of having to interact with someone’s dog(s).

Lt. Mark Stanmeyer says the officers will begin a new training session on the subject in September, but in an email had said “right now we are focused on homicides and non-fatal shootings.”

Tobin also said that while there were 41 dogs killed in 2009, there were 569 dogs taken out of some pretty extreme situations, and placed in shelters and eventually adopted out in that same year as well.