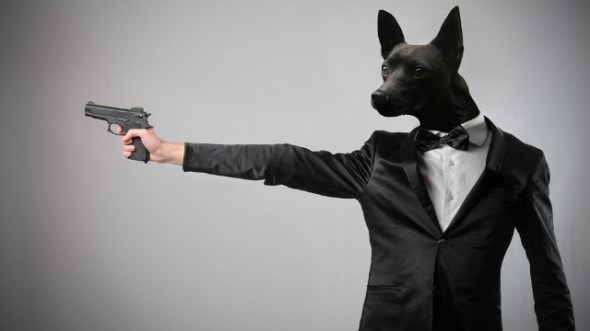 Just as guns should be kept safely away from children, they can be equally dangerous to have lying around near dogs.  Gregory Dale Lanier found this out the hard way when he was shot by his dog while driving his truck down a Florida street on Saturday.  Lanier is lucky to be alive after his loaded gun was accidentally discharged by his dog who was riding with him in his truck.

Apparently Lanier thought the magazine of the Berretta 9mm semi automatic handgun was empty when he laid it on the centre console with the safety off after leaving a restaurant.  His dog, while moving around the truck kicked the gun and shot him in the leg. “Lanier said he heard a ‘boom’, saw smoke and felt a burning in his leg,” according to the police report.

Lanier pulled over at a service station where he wrapped his leg in a towel and called for help.  He was treated and released from hospital as the bullet had passed through his calf and entered the door of the truck.  In addition to the Berretta, Lanier also had a loaded Marlin rifle with a scope attached to it, several boxes of .243 and .380 ammunition and spent casings in his truck.

Police ruled the shooting to be accidental and are not pressing any charges or detaining the dogs, who were of course innocent of any wrongdoing.  It is fortunate that no one else was hurt or killed as having a loaded semi automatic with the safety off lying around is a recipe for disaster.