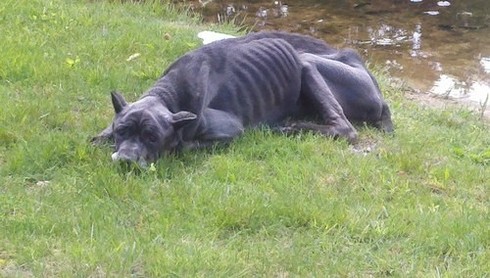 A New Jersey family has had to endure extensive harassment and threats from strangers after a picture of their terminally ill dog went viral. Many people have mistaken the photo for animal abuse when in fact the family had just been trying to keep their dog comfortable during her final days.

Roni and Elysia Amiel’s 8-year-old Neapolitan mastiff Zoey was diagnosed with terminal kidney failure in April. There was nothing that could be done for her condition and the Amiels decided to keep Zoey at home where she felt comfortable.  When Zoey’s physical condition deteriorated rapidly she lost a lot of weight. In June a neighbor saw Zoey looking very emaciated lying on the grass near her family home and took a picture. The neighbor then reported the dog to police.

Once an investigation was conducted by animal control they concluded that there was no abuse by the Amiel family. However, the photograph taken by the neighbor went viral on the internet without any context and social media began judging the family without the facts. Many viewers of the photo jumped to the wrong conclusion that Zoey had been abused. The Amiel family became inundated with threats and has been relentlessly harassed over the picture. “This online harassment has caused a great deal of stress and fear in the Amiel home,” Police Sgt. John-Paul Beebe said. “The accusations that have been directed at the family are baseless in fact, harassing in nature and, in some respect, criminal. The department’s Detective Bureau is currently investigating to determine if criminal charges should be filed and jurisdictional concerns that would attach.”

The Amiel family never got the goodbye they wanted for their beloved Zoey and have had to endure wrongful judgments for months now. This harassment has huge effects. The Amiels were considering adopting a new dog, but many rescues have put them on “do not adopt” lists based on the false assumptions being spread about the family.