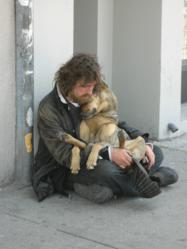 Genevieve Frederick, Founder of Pets of the Homeless said, “Since 2008, collection site members have taken over 124 tons of pet food and supplies to homeless shelters, food banks and soup kitchens across the country. Some of our volunteers take it to the streets where the homeless congregate. It is a combined effort to continue year-round collections of pet food. We applaud the caring, member sites who have reported their contributions. The need is great for communities to continue to donate to this on-going effort.”

“Most shelters do not allow animals, so rather than give up their beloved pets, many homeless stay on the streets.” Ms Frederick explained, “We provide pet sleeping crates, free of charge, to homeless shelters that allow refuge to the homeless with pets.”

Feeding Pets of the Homeless provides support to pet business owners who wish to give back to their community by becoming a member collection site. Helpful start-up information is available on the website.

For more information about Pets of the Homeless, visit http://www.petsofthehomeless.org