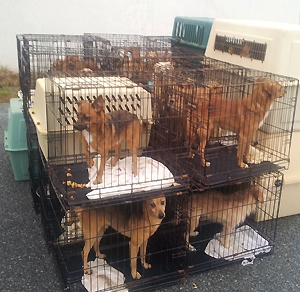 When staff at the Richmond Animal Protection Society arrived to work on Friday they found 38 dogs outside the shelter that had been left in 20 kennels that were covered by several tarps. Only about 12 miles away another 12 dogs were found left outside a shelter in New Westminster by a security guard.

It is still not clear whether the two incidents are linked but the Richmond RCMP has started investigating both.

The 38 dogs abandoned at the Richmond shelter were healthy and in good condition. While the 12 dogs left in New Westminster were in worse condition. Now all 50 dos are getting care and will soon be available for adoption.

Already phone calls have been flooding in to the shelters with interest in adopting the abandoned dogs. Donations have also been coming in as it will cost the city thousands of dollars to care for the dogs until they can find new homes.