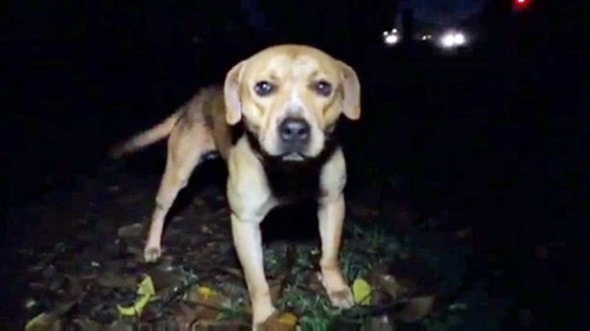 Captain Les Porter dove through flames to rescue a dog trapped inside a burning barn on Thursday morning. Thanks to his efforts a pit bull named Moe only suffered some minor burns and is alive.

A passing motorist alerted Tim Chandler and his wife Tiffany that their barn was on fire. Chandler rushed out to the barn where his dog Moe stays at night. “The heat from the fire just blew me backwards. The only thing we could think of was the dog,” said Chandler. Firefighters arrived on the scene to find the barn consumed by flames. They were quickly informed that Moe was inside tied up in a dog run with no way of escaping.

When Captain Les Porter heard about the dog he didn’t hesitate. “His first priority was to rescue the dog,” said Battalion Chief Paul Spani. Moe was hiding from the fire under a boat in the barn. Porter told firefighters to shower him with water while he ran in to save Moe. Porter struggled for a minute to free Moe from the chain, but as soon as Moe was free he sprinted towards the Chandlers. When firefighters first arrived on the scene Captain Porter thought Moe was most likely dead because of the intensity of fire. Remarkably Moe escaped with only a burn to his one paw.

“I can’t put into words how grateful I am,” said Chandler. “A lot of people would think it’s just a dog, but he approached him like a human being.” For Chandler it was second nature, he owns three dogs and says he likes dogs more than some people.