A local farmer discovered a dog trapped in a well near farm fields in Castellon, Valencia, Spain. 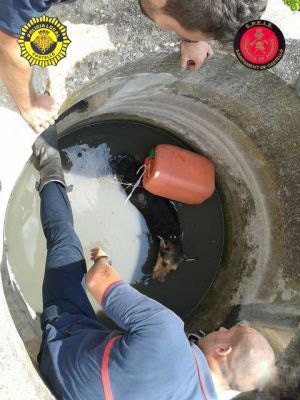 On August 21, 2013, a farmer heard a dog howling around 1 p.m., and when the man when to investigate he realized the noise came from a nearby well. Since it was difficult for the man to rescue the dog, the farm worker headed to the local police station to report the animal in need.

According to a report published in El Periodic, local police officers and firefighters worked together to rescue the mix-breed dog.

The canine was found in bad shape. He was in shock, suffered from hypothermia, and his front paws had cuts and bruises from his attempts to climb out of the well.

The dog was taken back to the police station and was scanned for a microchip. Since the canine did have a registered chip, his owners were contacted and the dog was picked up.

Later that afternoon the dog’s owners contacted the officers to inform them that the dog unfortunately died. The canine couldn’t recover from his state of shock.

Based on the farmer’s statement, this was not the first time a dog had fallen into the well. Authorities informed farm owners they must take precautionary measures to ensure the safety of all animals and workers around the water reservoirs.

Authorities requested that all wells get secured and fenced off. In the future, all local animals and land workers will not be susceptible to falling and getting trapped in these wells.