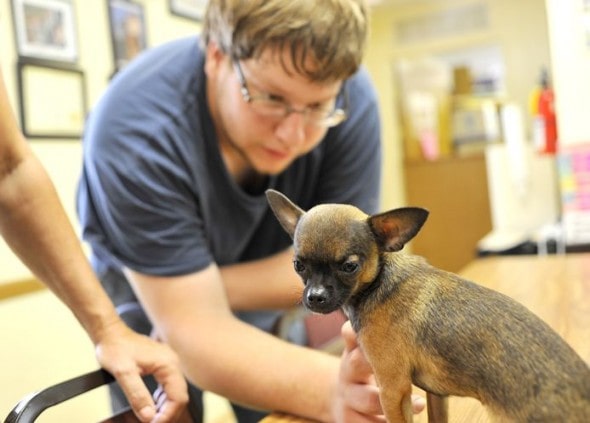 Earlier this month Peanut was found abandoned in a mall bathroom. The Chihuahua was half-starved and frail, but now is getting a second chance at a happy life as he has found a new family.

On August 11th, security guards discovered the Chihuahua hanging in a cloth bag in a bathroom stall at the Gulf View Square Mall in Port Richey, Florida. The 6-month-old Chihuahua was brought to the Humane Society of the Nature Coast where they helped him get healthy and worked to find him a good home.

Last week executive director of the Humane Society of the Nature Coast, Joanne Schoch, met a couple in the waiting room of her doctor’s office. The couple knew nothing of Peanut’s story and was dealing with the recent loss of their cat. Schoch had brought Peanut with her and the woman asked if she could hold Peanut while Schoch was with the doctor.

Peanut, though docile, typically acted nervous and anxious whenever he felt abandoned. However, Schoch was shocked to come back out to the waiting room and find Peanut sound asleep in the woman’s arms.

“I couldn’t believe how calm he was,” said Schoch. “Ever since he came to us, he has been a nervous wreck. That dog picked her, and she picked that dog.”

Peanut had found his family. In his first week at home he is settling in well. He is still working to put on weight, but he has found his happy ending.

“I can’t think of a better success story for us to tell,” said Schoch. “Things turned out about as perfect as we could ever ask for.”