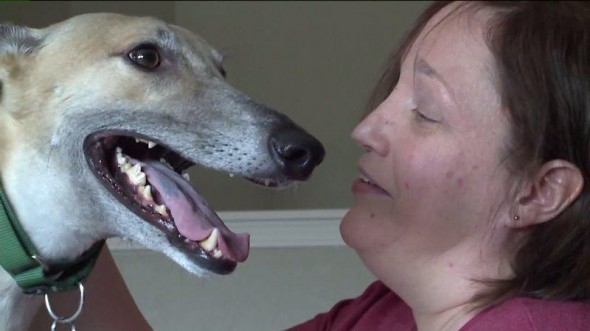 Erin Cramer adopted Clobber from a Greyhound rescue two months ago. Cramer rescued Clobber and now Clobber has returned the favor and saved her life.

When Cramer and her daughter first saw Clobber at Greyhound Pets of America they knew he was the dog for them.

“It was just one of those things where (we knew) this was our dog for sure,” said Cramer.

Cramer was home sick recently when Clobber started acting strange. Cramer tried taking him outside, but as soon as he was outside he tried to take Cramer back inside. So Cramer followed Clobber to the laundry room and she was immediately taken aback.

“(A) wall of gas just came pouring out,” said Cramer.

Cramer’s water heater was leaking and filling the room with natural gas. That wasn’t the only danger. Cramer’s plumber later told her the heater was also sparking.

“He said it probably would have ignited the gas fumes and taken out not only this house but several around me,” said Cramer.

Everyone is safe though thanks to Clobber.

“If it wasn’t for him coming into our lives, we probably wouldn’t be here right now,” said Cramer.