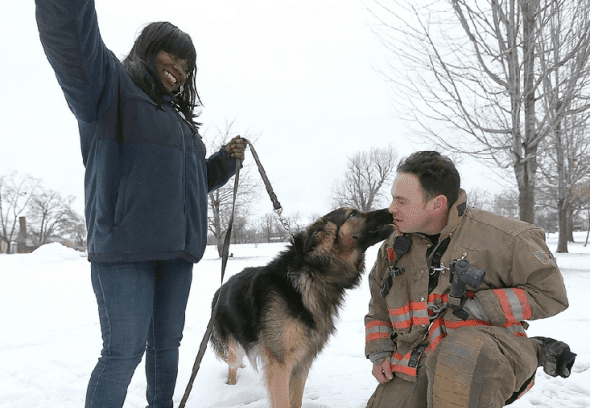 A woman nearly fell into a deep sinkhole while out for a walk with her dog on Sunday. She managed to save herself, but when her dog came running to help he ended up falling into the deep sinkhole. Firefighters came to his rescue and saved the dog.

Mattie Moore takes her dog Mack for a long walk every morning. The two were walking in Martin Luther King Park in Buffalo, New York early Sunday morning when Moore suddenly felt the ground give way underneath her.

She was just a short distance off the walking path when her one leg and foot fell through the ground into a deep sinkhole. She was able to keep herself above ground by her elbows. She crawled to safety but as she struggled to get out Mack came to try and help.

“He thought something was wrong,” said Moore. “He comes up behind me and falls right in.”

The sinkhole which was only a few feet wide at the top opened up to a much bigger hole below and Mack had fallen about ten feet to the bottom where the sinkhole was filled with water. Moore quickly called police for help and soon both police and firefighters were on the scene.

Firefighters realized a broken water pipe had caused the sinkhole and quickly got to work to rescue Mack. Firefighters put wooden boards down to help distribute their weight and worked on making the opening bigger so they could rescue Mack. Once the opening was big enough they set up a tripod over the hole and firefighter Michael Paveljack strapped into a rope and was lowered into the sinkhole.

At this point Mack had been in the watery sink hole for over an hour. When Paveljack reached the bottom Mack was clearly relieved to see help.

“He was ready to get out of there,” said Paveljack. “I tried to lift him up, but he was too heavy.”

“He was happy to be out,” said Moore. “It was a beautiful thing. He was wagging his tail, looking at all the people.”

Mack is now safe again and the city is working to repair the sink hole and the broken water pipe.