Firefighters save a litter of puppies

On Friday firefighters and Richmond, Virginia came to the aid of six puppies that were trapped in a crawl space in an abandoned home.

When the litter’s mother wouldn’t let parishioners at a church animal control came to investigate. “The mother was being very protective,” said Animal Care and Control field supervisor Lieutenant Mark Wachner. “She was trying to keep them from coming in and out.” Upon further investigation the animal control officers discovered a litter in a small crawl space in the vacant home next door. 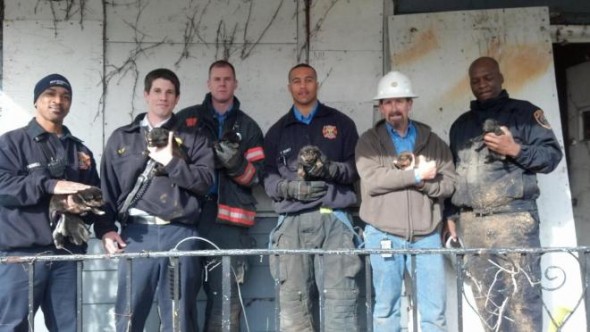 The crawl space was so small that they were unable to get to the puppies, so they called the fire department for help. “The crawl space they were in was so small,” said firefighter Nathan Oyler. “There was no access to it. The biggest challenge was cutting a hole in the floor.” Once the firefighters were able to cut a hole in the floor animal control officers brought the puppies to safety.

“Without the fire department’s help we wouldn’t have gotten to them,” said Wachner. The puppies are being cared for by the Richmond Animal Care and Control where they will spend four to six weeks before they are ready for adoption. They are continuing to search for the puppies’ mother; she was not at the home during the rescue.