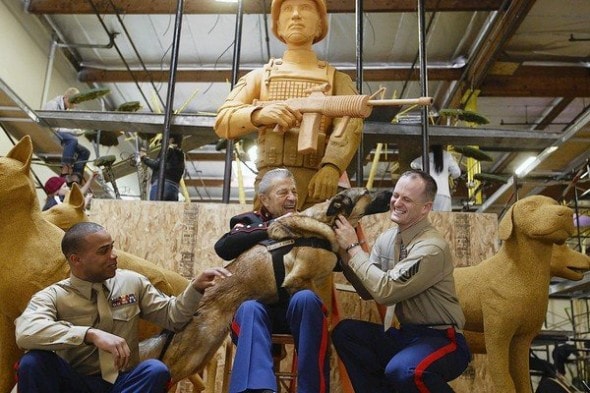 The Rose Parade held in Pasadena, California on New Year’s Day is seen by millions worldwide. This year’s parade will feature a float honoring military working dogs and their handlers.

“Canines with Courage” is the name of the float sponsored by Natural Balance Pet Food and it will showcase an exact replica of the first-ever United States Military Working Dog Teams National Monument. “I’m so proud of this float,” said Natural Balance President Joey Herrick. “This is not trying to set a Guinness record this is honoring our soldiers.”

Four handlers and their dogs representing the Air Force, Army and Marines will be riding the float. Lucca, a German shepherd-Malinois mix who lost her leg to a roadside bomb in Afghanistan nine months ago, will be one of the dogs riding on the float. In the over 400 missions Lucca led not a single Marine was injured. Lucca will be accompanied by Cpl. Juan Rodriguez. “She’s loving the attention; Lucca deserves it,” he said. Rodriguez says he owes Lucca his life. Lucca lost her leg from a roadside bomb, an effort that saved many marines. She now lives happily in retirement and is enjoying being part of the Rose Parade this year.

Another participant on the float is 86-year-old retired Marine Robert Harr. He trained the most decorated war dog in the Pacific theater in WWII, Oki. After the war he smuggled Oki home. When Oki passed away in 1958 he was buried with full military services in Newport Beach. Harr visits the site every year on Oki’s birthday.

The Rose Parade will take place on Tuesday, January 1st at 8 a.m. (PST) and will be broadcast on several channels including ABC and Hallmark Channel. The actual United States Military Working Dog Teams National Monument is scheduled to be completed in San Antonio on October 13th.