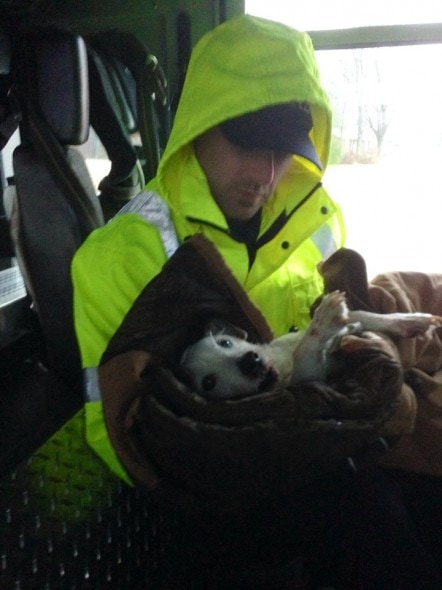 Firefighters in Murfreesboro, Tennessee came to the rescue of a Jack Russell Terrier that was injured in a car crash early Sunday morning.

Jack was riding with his owner when their car hit a power pole early Sunday morning. Jack was thrown into the front windshield and seriously injured.

When firefighters arrived on the scene they found Jack on the floor in front of the passenger seat. He had cuts to his head and was unable to move his back legs. Firefighters, not sure of how seriously Jack was injured, carefully immobilized him and rescued him from the car. They then wrapped him in a jacket and took him to the 24-Hour Animal Medical Center.

The firefighters called the vet later in the day to check on Jack. The veterinarian’s office told them Jack had sustained a concussion. He was in stable condition by Monday morning. Jack’s owner was unharmed in the crash.

“We just hope that what we did, gave the little guy a fighting chance,” said Captain Mark McCluskey.

3 thoughts on “Firefighters Save Injured Dog from Car Accident”