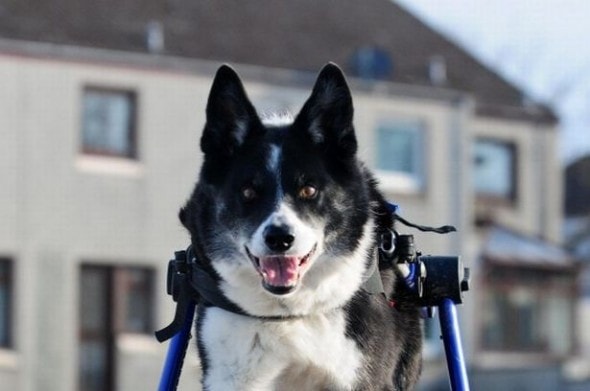 A 12 year old border collie was suffering so much from depression after an injury left him partially paralyzed that his owners considered putting him down.  But then he got a new set of wheels and a new lease on life. Barney was outfitted with a wheelchair from a company called Wheels4Dogs, and now he is happy as can be.

The accident happened about 4 years ago when Barney was racing over a bridge and slipped and fell.  He went down in a heap, to the horror of his owners, Marie and Richard Thompson, who had to carry him to their car and rush him to hospital.  “We had to carry him home because his nerves had been severely damaged and he was completely paralysed.  He spent two weeks at St Andrews in the spinal unit and it was touch and go as to whether he would survive.”

He did survive, but after 6 months of recuperation his nerves healed and he was left with terrible pain and barely able to walk.  Marie said: “He became severely depressed and it got to the stage where myself and Richard were going to have Barney put down as he was just miserable. “It got to the stage where he was keeping us up all night with his howling because he was so unhappy – and that’s when we decided to do something out of the ordinary.” 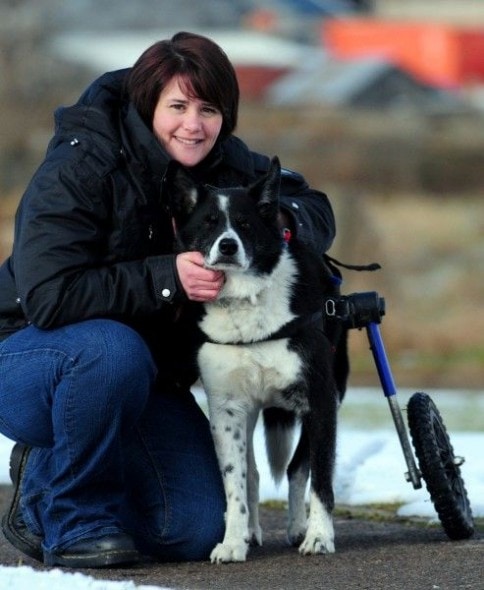 The Thompson’s were skeptical at first, thinking that timid Barney would not like the contraption. But on the first day his whole outlook changed.  “He was a completely different dog. He was so happy to be able to run and chase his ball in the fields again.  It took a while for him to build his muscles up again, but the change was dramatic.

Now, the pooch who could barely get from the house to the garden, goes for 5 mile walks with pleasure and life is once again full of possibility.

1 thought on “New wheels, and new freedom for Barney”