When Michigan’s Grand Rapids firefighters were called to put out a fire in the 1100 block of Sigsbee Street SE, the last thing they expected was to rescue and revive a dog, but thanks to their skills and their pet oxygen masks, the little dog that almost died in the fire is alive.

Firefighters entered the home thinking it was empty, but a few feet from the front door, they found a stiff , soot filthy dog, lying by the door. 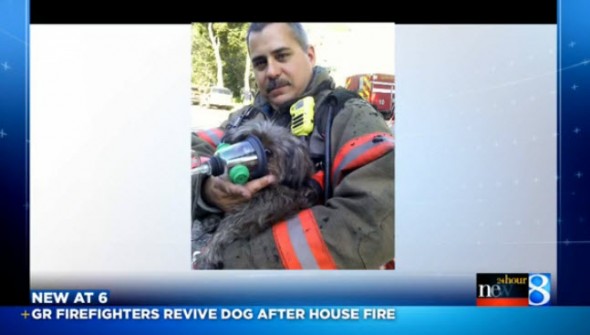 Firefighter Craig Lewis said the dog was not in good shape and he feared the pooch wouldn’t make it.

“He was breathing three, maybe four times a minute,” Lewis told 24 Hour News 8. “Very shallow, raspy, stiff as a board.”

Lewis scooped the dog off the floor and rushed him to the fire engine. There, he was administered oxygen and waited to see signs of improvements. Other firefighters gathered around the dog and hoped the little pup would regain consciousness. It took 30 minutes but in the end, the dog fully recovery.

“After 10 minutes, he started just kind of loosening up and looking around and then he opened his eyes and started licking his lips,” said Lewis. “He liked the oxygen when he got it, and you could just feel the difference, feel his whole body change.”

The firefighters were glad their engines are fitted with pet oxygen masks. If it wasn’t for the masks, they wouldn’t be able to save pets like they did on that day.