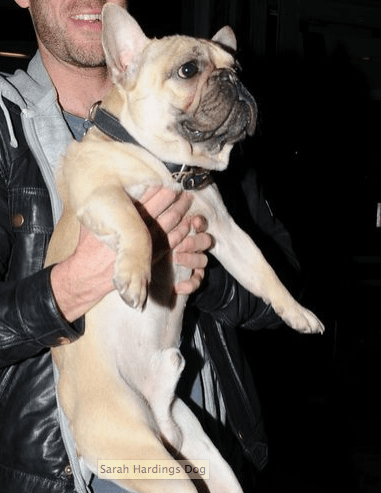 Sarah Harding of Girls Aloud was about to go on stage and perform in Glasgow when someone told her that her dog could not accompany her and the band to Ireland for the next portion of their tour.  The news caught her so off guard that in her distress she forgot some of the lyrics to the popular hit Life Got Cold just moments later, in front of a packed house.

Sarah and Yogi, her 2 year old french bulldog, always travel together.  He has been a fixture on the tour and Harding apparently took all steps necessary to ensure he would be able to accompany her to Ireland as well.  “Sarah wanted him to join her for the Irish leg of the tour and had correctly filled out all the paperwork to ensure Yogi was granted a passport.  However, a recent statutory change meant that Yogi’s paperwork wasn’t approved because he wouldn’t be in the country long enough,” said a source close to Sarah.

When Sarah became suddenly speechless during her solo, another band member stepped in to sing the forgotten lyrics as Harding looked sheepish.  “She was so preoccupied with thoughts of Yogi and being without him, she forgot a few lyrics. Obviously, Sarah does normally know the words and was mortified afterwards,” said the source.

Of course any devoted dog owner can understand how receiving unpleasant news about their pet is hard at the best of times, and much harder when a person is about to perform in front of thousands of fans.  It goes to show how much she cares for her pooch.  The tour will continue, but sadly without precious Yogi for the time being.