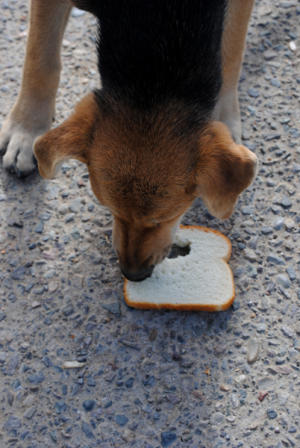 Imagine sleeping outside in November in New Mexico, with only a blanket and a few friends to huddle with for warmth.  This is the life many “Rez dogs” in Shiprock face each year as winter takes hold and temperatures drop at night.  “Every morning we come here, they’re all huddled in the corner,” said Marquita Mark, one of the outside vendors lined up in the City Market parking lot in Shiprock.

Marquita Mark is referring to the dogs, male and female, as well as puppies, who are homeless, abandoned, and neglected that gather together for warmth and survival.  Not only do they face the challenge of finding food and water, shelter is scarce, and the danger of getting hit by a car is ever present as well.  The dogs hang out around the market in the hopes of catching a few scraps of food from a sympathetic vendor or shopper.  One dog, with matted fur and weepy eyes, gets lucky as Mark tosses her a piece of bread.

“This one always visits us,” Mark’s aunt, Paula, said. “There used to be another one that was brown that used to come with it. I don’t know what happened to it.”  Many do not survive winter.   Jeannie Benally, an extension agent with the University of Arizona’s agricultural and 4-H youth program said “We see a lot of them on the road. If you save them, they want to protect you.”  Benally found her dog starving near a canal before taking it in a few years ago.  She nursed it from near starvation to being a healthy, loving pet. 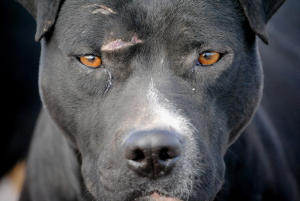 It is estimated by the Navajo Nation Animal Control program that there are hundreds of thousands of dogs on the Navajo Nation, many of which were abandoned by their families because they couldn’t afford to take care of them, or just didn’t want to bother.  “It’s common on the rez. People throw off their dogs all the time, especially if they’re girls,” said Seline Begaye, a grocery shopper who ended up taking home a dog found in the parking lot outside after it was nearly hit by a car.  Female puppies are at greater risk of being abandoned because their owners can’t afford to get them spayed and they don’t want the added burden of looking after  a litter of puppies.

The Navajo Nation Puppy Adoption Program and The Blackhat Humane Society are trying to help find homes for these puppies, who are simply victims of circumstance.  The Shiprock Veterinary Clinic has a vet technician and a part time vet that does surgeries once or twice a week and has information about low cost spaying and neutering.   For information about how to adopt, visit http://www.petfinder.com/shelters/rezdog.html and save a precious life.  “People are always dumping their dogs,” Benally said, adding “Rez dogs will serve you well.”