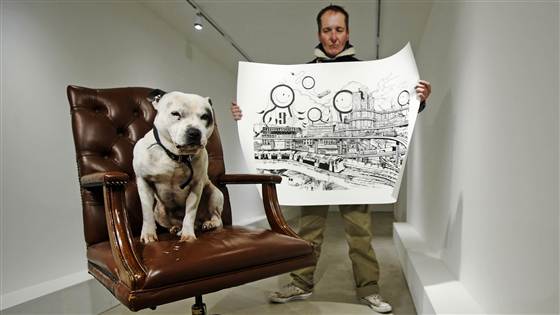 John Dolan was a homeless man that used to sell his sketches for pocket change on the streets of London.  He credits his sketches of his dog George, a Staffordshire bull terrier, for his rise from the bottom to where he is today.

Dolan recalls his spiral into drugs, drinking and a life of crime that put him on the streets.  Things changed one day when a fellow homeless woman got George, who was just a pup back then.  She traded George to Dolan for the price of a can of beer, and a match in heaven was made.

Dolan started sketching the scenes around him, and was adding George to them, and trying to sell them for pocket change.  It wasn’t too long until people started to see his work, and actually buy it.

“The drawings I do of him are quite simple but I’ve done one that’s been in most of the papers, it’s the very detailed one, it’s quite a big drawing,” said Dolan.

Dolan can actually afford to live indoors, but still prefers to be outside when he draws.

“I’ve captured him magnificently in that, but these little ones that I do, I basically try and capture his personality if I can in all of them,” he said.

Dolan’s first major success came in the form of a chance meeting with Richard Howard-Griffin, who runs street art tours in East London.  He also has a gallery there and set Dolan up with his first showing.

On the heels of the success of the first show, there’s now a second called “John and George.”

“I mean, John’s rise has been meteoric in the art world, it’s like watching an artist’s career in fast-forward – that’s what a lot of artists say so his first show was a sell-out, he’s got a second show now coming out which is really, really amazing,” said Howard-Griffin.

Now, Dolan is branching out a bit for his next series of works.  He’s planning to make a book of drawings of rock stars with their dogs in conjunction with a dog shelter.

Even with his new found fame, and jetting all over the globe doing shows, his best friend and inspiration has never been far from his side.  Dolan has also written a book about his life with his dog called “John and George: The Dog Who Changed my Life.”

“He was quite an aggressive dog and he would growl at you and he was a cat chaser.  He was very weary of people, and when I started training him, within a month of me starting to train him, basically his personality began to change,” Dolan said.

“He became a really pleasant dog!”