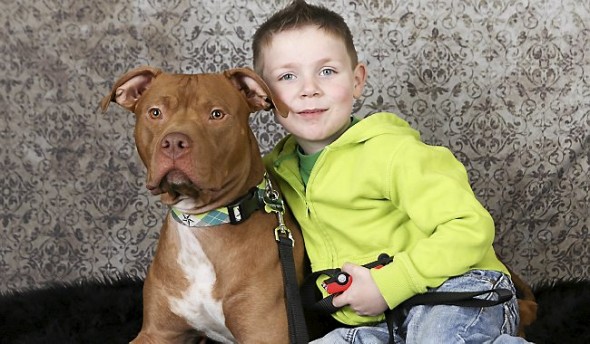 Christi Smith saved a pit bull named TatorTot just hours before he was scheduled to be euthanized at Minneapolis Animal Care and Control. Less than a week later TatorTot returned the favor when he helped save her 4-year-old son.

Christi Smith came to TatorTot’s rescue and saved him from death and planned to foster the pit bull until she could find him a good home. She was afraid he’d be too high energy for her to keep permanently. On September 28th Smith took TatorTot into her home and she soon realized that the home TatorTot belonged in permanently was her own.

“I took him to the dog park and let him run around,” said Smith. “When I brought him back home, that’s when he mellowed out. By that evening, I already had a feeling I wanted to keep him.”

On only his fourth night with Smith, TatorTot made it clear he belonged with her family.

“I put my son to bed at about 8:30 in the evening,” said Smith. “He woke up between 12 and 1:30 to ask for something to drink. He was acting weird – really out of it. I chalked it up to being deliriously tired. I wasn’t too concerned.”

TatorTot sensed something was wrong though. The pit bull began barking and running back and forth between Smith and her son Peyton. Smith thought at first that TatorTot just hadn’t exercised out all of his energy, but the pit bull wouldn’t give up.

“Finally I went to check on my son,” said Smith. “He was barely breathing, TatorTot was on his bed, barking and pawing at him, licking his face. Any normal child would have woken up. He wasn’t waking up.”

Smith raced Peyton to the emergency room where they discovered his blood sugar was dangerously low. Peyton tested negative for diabetes and doctors are still unsure what caused his blood sugar to drop so low that night, but one thing Smith is sure of is that TatorTot saved Peyton’s life.