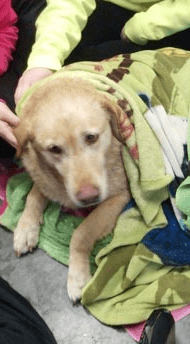 On Saturday afternoon a nine-year-old lab named Sandy was walking across an icy pond when she fell in. Four teenage girls were nearby and came to Sandy’s rescue and saved her life.

The Pottsville Junior High School basketball team in Arkansas was supposed to be playing a basketball game on Saturday, but because of bad weather the game was cancelled. Team members Erin Aulgur, Madi Rust, Kaylin Parker and Jordan Wright instead spent the afternoon hanging out by a pond near one of their houses.

Meanwhile Sandy and another dog had escaped their yard through a hole in the fence. They were running on the icy pond towards the girls when Sandy fell in.

“I was in tears,” Rust said. “The other dog that didn’t fall in, he wanted to help Sandy. He walked over to us.”

The girls quickly ran to neighbor Ken Jones an asked for rope to try to rescue Sandy. Jones instead grabbed his canoe and worked his way out to Sandy who was trying to stay afloat by treading water.

“At this point, we were crying because we were thinking the dog was going to die,” said Aulgur. 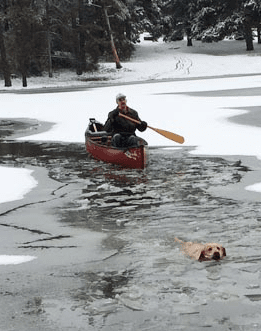 Jones was able to reach Sandy and get her to safety. Once on land the girls wrapped Sandy in a towel and took her back to Aulgur’s house. They then posted pictures of the dogs on Facebook and were able to locate their very relieved owner.

Sandy’s owner is repairing the fence to prevent the dogs from escaping again.