Bringing a yellow lab mix to a water dog competition may seem like stacking the deck, but really it’s just a whole lot of fun. And Sandy, 11, has been enjoying champion status as a DockDog for quite some time. Life didn’t start out so rosy for her, though.

She was rescued as a one-and-a-half year old, discovered at a North Carolina roadside, scarred, neglected and extremely timing. That rescue was Sandy’s miracle, finding her was owner Terry Moore’s.

A decade ago, he and wife Jo Ann, attended a Care-A-Lot adoption event in search of a golden retriever, but, Moore told Virginia news outlet the Daily Press, one look was all his wife needed.

“There were retrievers all over the place, but my wife looked over at this yellow lab leaning against a lady’s leg and said, ‘That’s your dog.’ That was divine intervention right there. It really was.” 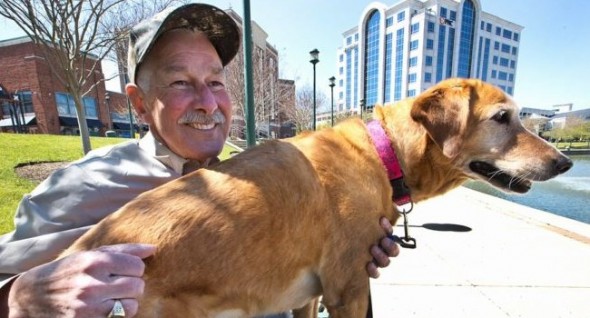 Although Sandy had been traumatized by prior experiences – she would shrink away if someone tried to pet her – a few months with Moore drew her out of her shell. She went on to train and become a certified therapy dog, and once he and Sandy discovered her love of the water – a DockDogs competitor.

“It took her a second to figure out swimming,” said Moore. “…but she was all about water after that first time.”
After that, dock jumping and retrieving became a regular day of play and eventually, the pair discovered DockDogs. Sandy’s qualified for the finals her first time out. The popular competitions are a joy for dog and owner – water-loving dogs are judged on their speed and the height and distance of their jumps.

And in a full-circle moment, Sandy will soon participate in the Care-a-Lot Canine Sporting Extravaganza in Virginia Beach. Moore and Sandy are a fixed pair, particularly since Moore retired.

As much as she enjoys the water, Moore says she loves the woods even more.

“She does dock jumping because she knows it makes me happy. But she really loves to be running around in the field.”