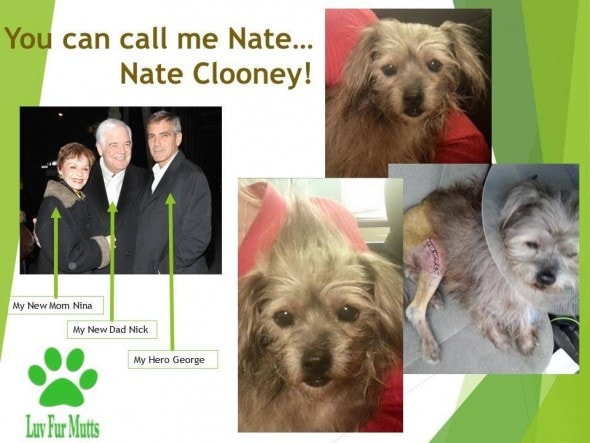 By now, most of us know that George Clooney is no stranger to doing good deeds – especially when it comes to dogs, it seems.  Back in October he adopted a Basset hound mix, and now he’s adopted another dog in need.

This comes from LuvFurMutts Animal Rescue:

Please excuse the delay in this Christmas story but it was important for us not to infringe upon the Clooneys holidays. We decided to wait a month. Now we would like to thank the Clooneys publicly and let the world know what a wonderful family they are. We are thrilled to share this with you now.

Nate the terrier came to LuvFurMutts from a hoarding case of 22 dogs; we took 11 of them. He was born with birth defects: a barrel chest, a leg that swayed. He walked like a hyena. Some of these dogs were fat, but not our Nate. You could count the ribs on him. When we took Nate to adoption events, people would stare and kids would point. Several people applied to adopt him but then said no when they met him. He was with us nine months. The lowest point came when an adopter cried when she met him and said she would be depressed the rest of her life if she had to look at him every day. Why could they not see what we saw in him? A handsome, charming, sweet and normal little boy. Little did we know someone had been ogling him for a while watching his videos and reading his profile and Nate was about to get a very special Christmas surprise!

We are thrilled to announce that Hollywood Legend, Oscar/Golden Globe/Emmy winner and most impressively – philanthropist – George Clooney adopted our Prince Nate! All details were handled by George’s very efficient personal assistant, Angel. Angel said George picked Nate out, then showed him to his Mom, Nina, on YouTube. She watched his video over and over and she fell in love. He then asked his father, Nick, how he felt about the way Nate walks and he replied, “I guess it sounds like he gets around just as good as we do anymore.” Their terrier of ten years had died recently and it seemed that George had a feeling they were ready for a new furry friend.

Secretly, George (and wife Amal) Clooney had Angel call LuvFurMutts and arrange to have Nate adopted for his parents and to have Nate delivered on Christmas Eve to Nick and Nina. Nina cried a little when she opened the door and Nate was put into her arms. She was very surprised. She cried a little again when she read the card from George, Amal and Angel saying they wanted her to have Nate to enjoy Christmas with. We were not surprised that George Clooney had us deliver Nate to his mother on Christmas Eve as her gift, because we have all have heard the stories of the gentle soul his is. What is impressive is the fact that George picked Nate out and Nick and Nina accepted Nate just the way he is. They could have any dog in the world but they chose to adopt a dog who was crippled and could have been with LuvFurMutts for life. Those of us who grew up listening to Nick’s voice on TV and aw-ing at how beautiful Nina is, have also witnessed how they have always given back to their community.

We want to thank George and Amal Clooney for adopting Nate and their donation to LuvFurMutts that covered more than Nate’s previous surgery expenses. They had no idea of those previous surgeries nor did we know Nate’s heroes, the Clooneys, would be coming soon when Nate had the procedures. What a gift!

And we want to thank Nick and Nina Clooney for letting “the crazy dog lady” bang on their door early Christmas Eve. They were and are so gracious. We felt it would be rude to ask to take pictures. We gave Nick, Nina, George and his sister Adel all LuvFurMutts t-shirts. Perhaps one day we’ll get a family photo of them holding Nate.

Wishful thinking? Perhaps. We know that’s certainly not what’s important. We are just over the moon and most appreciative that they love Nate just the way his is – the way God made him. Our Nate is loved and in his forever home and will be spoiled to death for the rest of his life. From fighting to get food in his belly each day to being the only fur baby of two of the most wonderful people in Augusta, KY. It’s truly a fairy tale ending for Prince Nate… or should we say… a perfect Hollywood movie ending!

The original link can be found by clicking here.