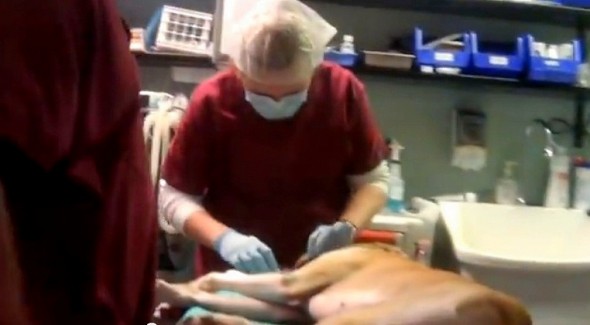 Georgia Regents University of Augusta has sparked outrage amongst animal lovers and the Humane Society of the United States, who is now investigating their “painful” and “unnecessary” experiments where they remove dogs’ teeth and replace them with human dental implants, only to euthanize the dogs so their jaws can be removed and studied.

“Dogs don’t need to die for frivolous dental experiments,” said Wayne Pacelle, president and CEO of the society. “It’s painful to watch these forlorn dogs sacrificed for these questionable purposes.”

A video taken by an undercover reporter for the HSUS, narrated by Kim Basinger, shows dogs in cages, desperate to get out. They have their teeth taken out and replaced with dental implants. Later, they are euthanized and have their necks flayed and sections of their jaws cut off for further study.

“In the two studies I reviewed, human research subjects could have been used, given that the products were already approved by the Food and Drug Administration and bone biopsies are commonly done in human studies,” said Dr. James P. Jensvold. “Animals used in research are often ‘sacrificed’ at the end of the study, and this is accepted as standard practice without taking into consideration the unnecessary emotional and physical suffering that the animals must endure.”

Since the video was posted on YouTube on November 20, it has gotten over 50,000 views. A protest was held on the school’s campus recently, and another is planned for December 7. An aspiring veterinarian attending the school transferred after being made aware of what was going on.

“What kind of veterinarian would I be if I stuck at a school that was potentially abusing animals? That goes against everything I’m for,” Hannah Kellems said.

WARNING: The following video contains graphic images that will be disturbing to all LWD fans, but particularly to highly empathetic ones.

The HSUS accused the university of acquiring the dogs from animal dealer Kenneth H. Schroeder ,who is facing a complaint with the US Department of Agriculture that he improperly obtained the animals, and that the dogs were not being adequately cared for during the research. The HSUS has also filed complaints with the the National Institute of Health’s Office of Animal Welfare.

GRU has gotten 186 dogs from Schroeder from 2005 to 2012. The six used for dental implant research were acquired in November 2012. The surgeries were performed in March 2013, and the dogs were euthanized in May.

The USDA says Schroeder got the dogs improperly, meaning that they may have come from “bunchers,” who often use unscrupulous methods to gather dogs.

She said while the experimentation is legal, what was being studied could have been done without using dogs.

“There’s no justification there,” she said. “The condition is not life-threatening in humans.”

The university denies the claims against them, alleging that the operations were done using anesthesia, and that the dogs were given painkillers afterward.

“The allegation that this research is strictly cosmetic, silly, or frivolous could not be further from the truth,” Mark Hamrick, the university’s senior vice president for research, wrote in an email to NBC News. “In this study, researchers were testing an antimicrobial coating that could help prevent dangerous infections in the gums and bones of the mouth.”

Georgia Regents University is not alone in testing on dogs, as well as other animals. Covance, a “contract research organization providing drug development and animal testing services,” used over 10,000 dogs in 2011 and 2012. More than 1,100 of those animals fell into “Column D,” the category the Animal and Plant Health Inspection Service of the USDA calls “experiments … involving accompanying pain or distress to the animals and for which appropriate anesthetic, analgesic, or tranquilizing drugs were used.” Central Carolina Community College, Globe University and Duke University also use dogs, many of which fall under Column D.

Helen Diggs, Director of Laboratory Animal Resources at Oregon State University in Corvallis, said that universities have strict rules regarding the approval of animal research.

“Before we say yea or nay about a specific project, we want to be sure that we’ve really thought about this, that this is the right species to be using,” she said.

Charlie Powell, Public Information Officer for the College of Veterinary Medicine at Washington State University in Pullman, says that dogs must be used to research products and procedures that directly benefit dogs. But he understands the outcry by animal lovers who have seen the video.

“You can imagine pain in your mouth, and you imagine a nice fuzzy dog, and it becomes pretty repulsive,” he said.

The HSUS has a link for people to leave a message with the USDA to stop using random source dog dealers, which can be found by clicking here. There is also a petition against these Class B dealers. There is another petition asking for the GRU president to stop allowing the school’s experiments on dogs.