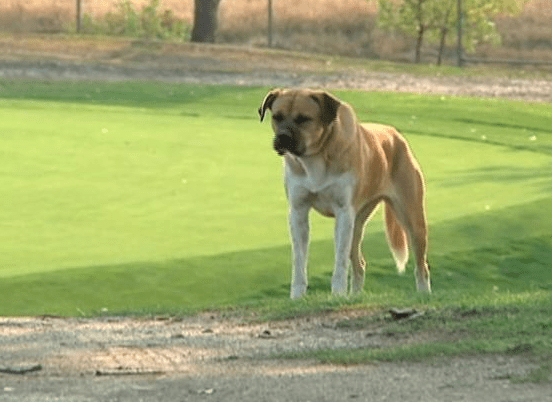 Over the summer a boxer mix showed up at the Anaconda Hill Golf Course and made it her home. She wouldn’t let anyone near her though. With winter coming and temperatures dropping one golfer made it his mission to take care of her. After several months of feeding her and winning her trust he was able to leash her and bring her out of the cold.

The boxer mix earned many names from the golfers at Anaconda Hills in Black Eagle, Montana. She spent her summer moving around with the different golfers but never getting too close. Animal control staff tried to capture her but were unsuccessful.

One golfer named Gary Hanson developed a relationship with the dog, who he named Molly. “We were usually one of the first groups to golf in the morning, and she was always there, following us around,” he said. As temperatures got colder and golfing became less frequent Gary wanted to make sure Molly was taken care of. “I took it upon myself to just try to feed her every day.” He quickly found that Molly’s favorite food was cheeseburgers.

Slowly Molly began to trust Hanson. “She would come up and eat…then she got comfortable and I was able to touch her on the nose and then on the head. Then I finally got to where I could pet her. She had kind of come around to the fact that I wasn’t going to hurt her.” After finally gaining Molly’s trust Hanson was able to put a leash on her.

Hanson took Molly to F & L Pet Resort. They estimate Molly is around three-years-old. She was found to be in good health, though a little thin. Molly is now in need of a home. Gary is considering adopting her, but he feels she would be better suited in a home with a big yard. Anyone interested in adopting Molly can call Pet Paw-see at 406-231-1132.