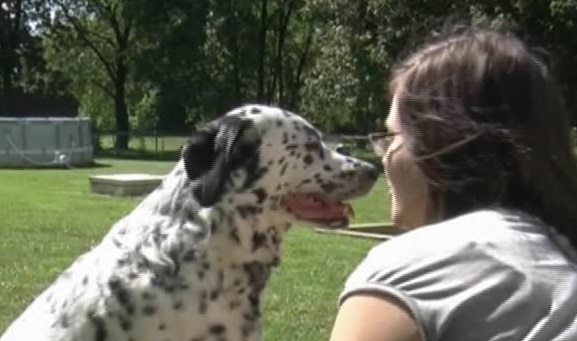 When a teenager was in a car accident with her dog a Good Samaritan came to their rescue. Not only did the stranger stay by the teens side until help arrived and then went above and beyond to care for the dog too.

Nineteen-year-old Taylor Calandrelle was driving with her Dalmatian-Coon Hound mix named Baby when the two were in a serious accident. Their car flipped when Calandrelle cut her wheel to avoid a stopped car.

Jodi Grimes witnessed the accident and rushed to help. Both Calandrelle and baby were injured. Grimes held Calandrelle’s hand until help could arrive.

“She was my angel that day,” said Calandrelle. “She stayed by my side and looked over me until the ambulance came.”

Calandrelle, who is doing well after the accident, can’t believe the kindness Grimes showed both her and Baby and is extremely grateful.

“If something would’ve happened to my dog,” Calandrelle said to Grimes, “and you wouldn’t have taken her to the vet, or she wouldn’t of gotten to the vet in time, I don’t know what I would’ve done. I just appreciate your kindness, and your kindness gives me hope that not everybody in this world is bad.”