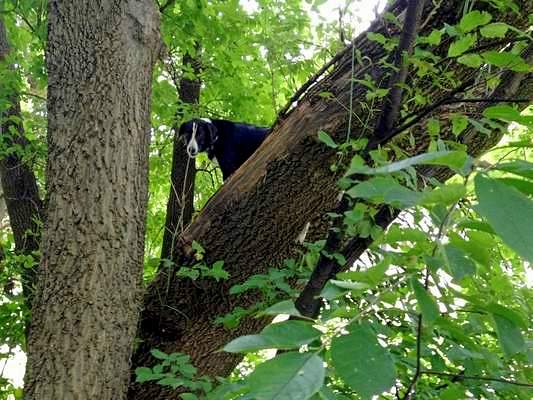 A seven-year-old border collie is home and safe after spending a couple days stuck in a tree.

Laddy escaped from his Davenport, Iowa property last Friday, but he didn’t go very far – only about two blocks – where it is believed that he spotted a squirrel and followed it.

Ron Stevenson was working in his yard when he heard the anxious barking of a dog. He had heard it before, but assumed it was just a neighbor’s dog and didn’t want to complain. This time, the barking sounded different.

“I heard a whining, and I knew something wasn’t right. This time, it sounded in distress,” Stevenson said.

He walked along his driveway to follow the sound. It seemed unlikely to be coming from above him, but Stevenson looked up, and there was Laddy.

“He was kind of shielded by leaves on the tree,” he said.

Stevenson believes Laddy was able to climb up the gradual slope of the oak tree, but became too scared to come back down. He called police, who were somewhat skeptical. Sure, they’ve heard of cats in trees, but dogs?

“They got here pretty fast, but I was getting impatient,” Stevenson said. “I didn’t know if the dog would bite me, but I just sort of shimmied up the tree. I grabbed him by the collar and sort of pulled him. I said, ‘It’s time for you to get out of this tree.'”

A responding officer recognized Laddy from the ‘missing dog’ fliers around the neighborhood, and knew where he lived.

“I asked where they found him, and the officer said, ‘You’ll never believe this,'” said Laddy’s owner, Cynthia Weeks.

She and her adventurous pup were soon reunited. Knowing her dog’s love for squirrel-chasing, she believes that is what led him up the tree. Aside from a few abrasions on his pads, Laddy is doing well.

“He was pretty subdued when he got home,” she said. “He’s been doing a ton of sleeping.”