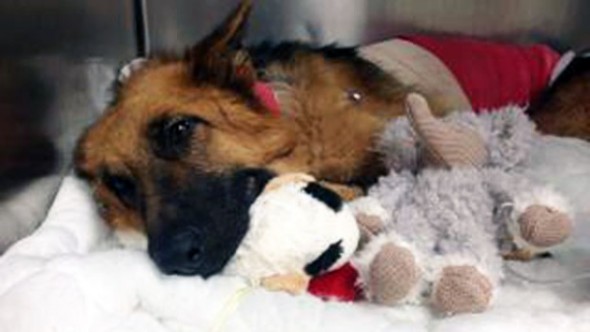 A stray dog named Sassy has been getting a lot of attention from around the world ever since the group that rescued her posted her story online. Sassy was found wandering the streets of Miami on March 27th.  She was emaciated, weighing in at 33 pounds which is less than half what she should weigh.  Sassy was initially found by a man who took her to Miami-Dade Animal Services in Medley, where because of her condition she was going to be put down.

Fortunately the one year old german shepherd was taken in by SHARE,  the Shepherd Help and Rescue Effort and they saved her life.  Sassy needed a lot of veterinary care as she was in rough shape when she was rescued.  Her liver was inflamed due to starvation, she had mouth ulcers and initially had be to fed through a feeding tube, and she was so weak she could not stand on her own for the first 6 days she was in hospital.

“When she got here she didn’t have the strength to lift her head on her own,” said Dr Jennifer Bibevski with Hollywood Animal Hospital.  “I didn’t think she was going to make it in the condition we first picked her up,” said Elissa Powers, who founded Shepherd Help And Rescue Effort Inc.  Now she can stand and walk, and can eat on her own.  “Just in the last three days or so she’s made a tremendous turnaround,” Bibevski said. “She’s up, she’s walking, she’s starting to eat on her own and definitely has a will to live.”

Support for Sassy has been pouring in, in the form of donations and letters of support to SHARE’s Facebook page.   She has a long recovery ahead of her but everyone involved is hopeful that she will eventually be healthy. She has already gained 5 pounds but still has a long way to go.  The next thing Sassy will need s a foster home, so if you can help or want information on Sassy or another german shepherd go to SHARE.

1 thought on “Starved dog on the road to recovery”