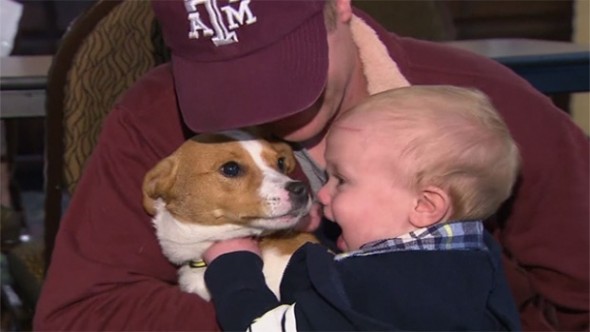 Days before Christmas Cody Bostwick, his pregnant wife Colby, their 13-month-old son Easton and their dog Jackie were travelling to Texas for the holidays when they were involved in a tragic car accident. The accident, which involved 25 cars, took Colby’s life. In the confusion and chaos of the crash Jackie went missing. Thanks to the help of many strangers Cody and Easton have now been reunited with Jackie, bringing them some comfort that they so desperately need.

While travelling on I-35 on December 20th the Bostwick family was involved in a 25-vehicle chain reaction crash. While the family tried to deal with the crash Jackie fled the scene. Dealing with the grief of losing his wife, who was pregnant with twins, Cody was hoping to bring Jackie back home. “Obviously we can’t have Colby back but having Jackie there, would just have a little sense of normalcy with Easton. It’s something that he’s seen every day of his life,” said Cody.

Two weeks later Cody finally got some good news, Jackie had been found. Jackie had ended up 40 miles south of the crash site when four days after the crash a truck driver spotted her and picked her up. The driver took Jackie to Minnesota where he gave her to a friend who began to try to track down Jackie’s owner. “She put Jackie on Craigslist,” said Cody. “She said she had emails instantly.”

Now that Jackie had been found she just needed to make her way Texas. There were plenty of volunteers wanting to help. When Sheri Jackson put the word out for volunteers she received over 70 e-mails from people wanting to help. In the end 12 volunteers drove Jackie from Minnesota to Texas for the emotional reunion.

Jackie recognized Cody and Easton instantly licking them with joy. Easton in turn giggled and clapped at the sight of his friend. Cody is grateful for all the kindness people have shown them in bringing Jackie back to his family. “It’s a bad situation, but this brings a little bit of normalcy back to our lives,’ he said.

3 thoughts on “Grieving family reunited with their lost dog”