On Dec. 6, 2013, Dallas, Texas, was hit by an unusual ice storm. During the storm many homes lost power, including Trey Bounds’ home in Oak Lawn. His two dogs, Pearl and Raleigh, were dazed by the storm and power outage and the pair darted out the door. They got lost.

Since the dogs ran away, Bounds has been looking for his beloved pets. He posted about them on Facebook and distributed fliers across his community. The white fluffy dogs were adopted six months ago from an animal shelter a day before they were scheduled to be put down, and Bounds has not lost hope that his four-legged friends will be found soon.

“I grew up in the country and I know how tough and resourceful dogs are,” Bounds told Dallas News. “As much as they are babied and pampered, they are resourceful and resilient.”

Just an hour after the pets escaped they were spotted by Norah Meier and photographed along the shoulder of Dallas North Tollway. Meier tried rescuing the dogs but they were spooked by passing cars and both dogs ran away.

Meier posted the image of the pets on her own Facebook page and Dallas Strays and Rescues message board. Soon after that Bounds contacted Meier and since then an entire network of animal lovers have banned together to help find the dogs.

The image of the dogs on the highway has been shared on Facebook thousands of time, and because of it and the fliers Bounds distributed, the worried dog owner has received many leads on his dogs. 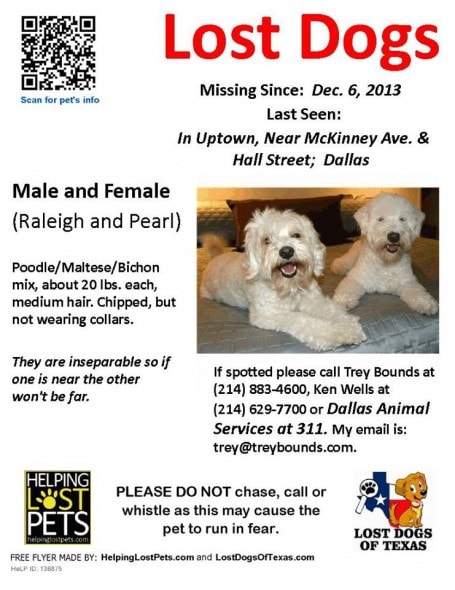 On Tuesday, Dec. 10, 2013, Bounds was reunited with one of his pets, Pearl. She had been picked up and sent to Dallas Animals Services (DAS), but unfortunately Raleigh was not with her.

Pearl was in good health and just like Bounds, she is missing her brother Raleigh.

“The first thing she did was rush up the stairs and look in every room,” said Bounds.

The pet owner continues to look for Raleigh and every day he follows up on tips received. As of yesterday, a white dog fitting Raleigh’s description was spotted in Lakewood near the Winsted Apartments on Winstead Drive, but the worried pet owner has not been able to make a positive confirmation.

“Raleigh will be VERY skittish by now, and is going to have to be gently coaxed with food,” posted Bounds on his Facebook page. “Please report any sightings ASAP to me directly and to Dallas Animal services at 311.”

Bounds continues to visit DAS, SPCA, and follow up on tips. He hopes to find Raleigh soon.

If you have any information that can lead to a happy reunion, please contact Bounds (see flier for more information).