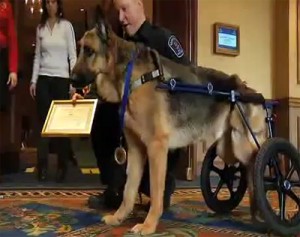 Update July 20, 2011.
Major has added another award to his growing collection: he has just been presented a Medal of Valor from the Minneapolis Canine Unit.

On Nov. 12, 2010, Major was stabbed in the spine while searching for suspects in a Maplewood burglary, leaving him permanently disabled.

In February, the Minnesota Veterinary Medical Association honored Major the dog with its “Hero” award at the organization’s annual conference in Minneapolis.  Sen. Amy Klobuchar presented the award. The incident has prompted the Minnesota Legislature to propose increasing penalties for anyone who hurts or kills law enforcement dogs.

View the ceremony in it’s entirety here, but keep a few tissues handy – seeing Major roll up to the stage to receive his award left me wrecked. This is the quintessential, selfless dog hero.  ♥