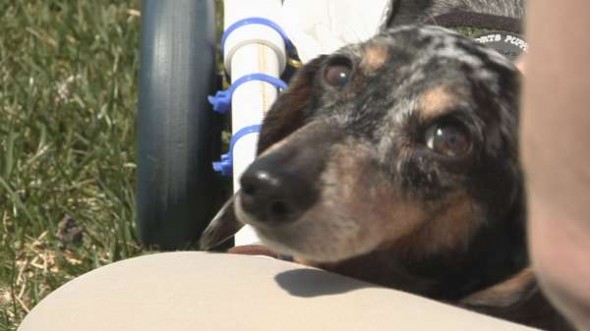 A dog left paralyzed from years of neglect in a puppy mill in North Carolina can now move around on his own thanks to his new owner.

Ricky Bobby and seven other dogs rescued have been recuperating at Morrisvilles’s Care First animal hospital since the puppy mill bust last month.  He has a hardened disc in his hindquarters that worsened after years of going untreated.  Veterinarian technician Megan Bliss fell in love with the little dog and adopted him.

“He had soars on his, on the underside of his body where he was dragging,” Megan said.  “His mouth was a wreck.  His teeth were basically rotting out of his mouth.” 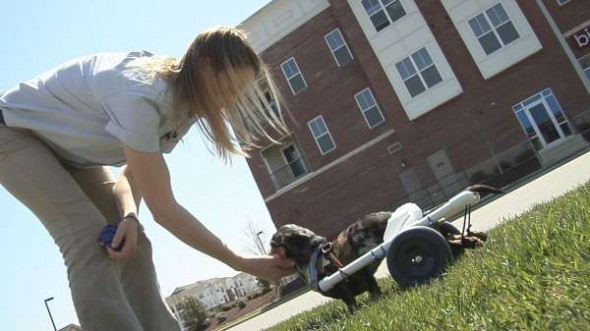 Ricky Bobby has only four teeth left, and was unable to walk.  But thanks to one of her clients, Megan was able to construct a cart for him that only cost her eleven dollars.  It was made out of donated baby stroller wheels, PVC pipe, zip ties and screws. Professional carts can cost upwards of $300, which many people cannot afford.  Now Ricky Bobby can go wherever Megan goes.

“He follows me everywhere, whether he’s in his cart or not, so he likes to stay right by me and that’s where he’s happiest,” she said.

Megan encourages others to adopt rescued dogs.  They often haven’t had much happiness or love in their lives, and many older dogs are overlooked.