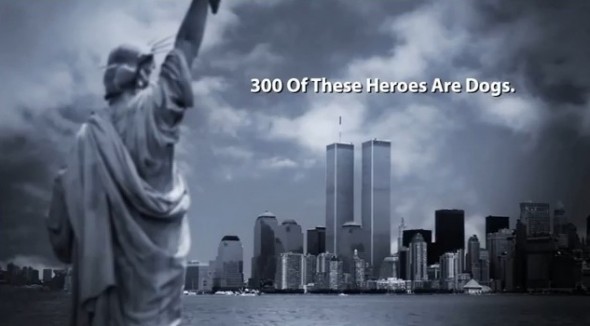 As the nation memorializes one of the worst events in our recent history, we take time to honor some canine hero who helped survivors of the tragedy.

On the morning of September 11, 2001, Genelle Guzman-McMillan was working in her office in one of the World Trade Center Buildings. She heard the terrible noise outside, and as she fled down the stairs, the building crumbled around her. 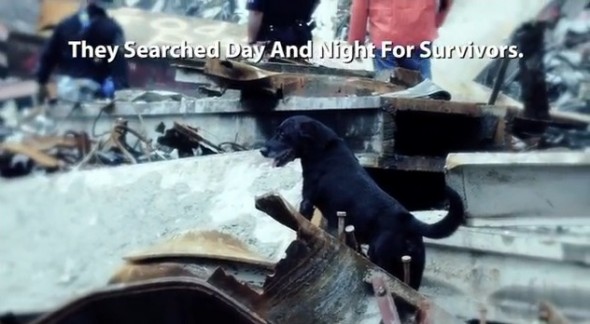 It would be 27 hours before she was pulled from the wreckage – the final living person to have been saved. It wasn’t a firefighter or police officer that found her, but a dog.

“It’s so awesome that the dogs could have this kind of sense, to find people buried under the rubble,” Guzman-McMillan told Animal Planet for their documentary Hero Dogs of 9/11. “I felt total renewed life in me. … That was the most joyful moment.”

Her story was one of many that inspired documentary producer Tanya Kelen to showcase some of the canine heroes of that day. Also honored were the first responders, trainers and veterinarians who helped make the dogs’ dedication possible. The program aired yesterday on Animal Planet, but unfortunately, there are no additional airings for the next two weeks (according to TV Guide).

“We found a number of people who were too shaken up to share their stories,” Kelen said of her meetings with 9/11 survivors. “But Genelle said she had a mission to keep telling her story because she’d been saved.”

Guzman-McMillan was one in a team of about fifteen Port Authority workers all trying to evacuate the building at once.

“I felt the walls cave in,” she said. “It was dark and everything was rumbling.”

Guzman-McMillan was trapped by steel and cement, unable to move until a dog alerted rescuers to her location. She was the only one in her group to survive. She was told by doctors that she would never be able to walk again. She defied them by becoming able to run again. She has since gotten married and had two daughters.

Over 300 specially trained search and rescue dogs scoured the debris in the days following the WTC collapse. They searched for survivors, and when there were no more to be found, they moved on to find remains. They also located jewelry and other personal items of victims that could be returned to mourning loved ones. Others served as therapy dogs to help victims and loved ones cope with the traumas they endured.

Another saved on 9/11 was Michael Hingson, whose seeing-eye dog Roselle led the WTC employee out of the building. Though people aren’t supposed to pet guide dogs while they’re on duty, a firefighter passing by Hingson stopped to pet and cuddle Roselle.

“It was probably the last unconditional act of love he got,” he said of the fireman, who died later that day.

Hingson later penned a book called Thunder Dog: The True Story of a Blind Man, His Guide Dog, and the Triumph of Trust at Ground Zero. Together they traveled the world, and Roselle died at the ripe old age of 13.

Kelen also featured stories of people like veterinarian Cynthia Otto. She was head of healthcare for the search and rescue dogs, some of whom were injured by smoke and debris. Many of these dogs had been rescued from shelters and trained for their special jobs.

“I’ve always been a dog lover,” Kelen explained, “but it amazed me how many people didn’t know the story of the dogs at ground zero who were in charge of finding survivors.”

Top Foods for Border Collies
Miniature Dogs: Health & Food
What’s the Best Diet for Your Dog?
Nulo Dog Food Reviews
Dog food for Poodles
How to Raise a Puppy: Recommendations from a Vet
EarthBorn Dog Food
Apoquel for your Dog