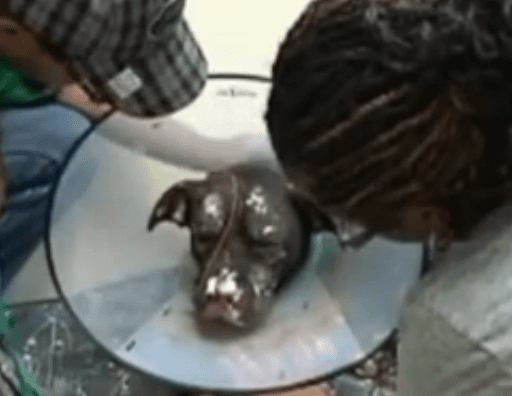 A 9-month-old pit bull puppy nearly lost his life, but was able to save his family from a house fire Thursday morning. Onyx suffered severe burns, but he is expected to make a full recovery.

Around 2 a.m. on Thursday morning Onyx started yelping. He woke up his owner Trevor Myers who knew something was different about Onyx’s bark. He ran to the back porch where Onyx was in his crate and found the puppy on fire. Myres quickly doused Onyx in water. The rest of the family was able to get safely out thanks to Onyx’s yelping.

The Florida Fire Marshal’s Office is investigating the fire as arson. The house received over $5,000 and damage, but what the family is most concerned about is Onyx. The hero puppy has burns on his face, corneas and legs.

“Onyx is doing pretty well, all things considered,” said Dr. Kathleen Cavell with Northwood Animal Hospital. “He suffered some pretty severe burns over his face, his ears, his legs and a little bit over his body as well.”

The family was afraid they might need to surrender Onyx because they couldn’t afford his treatment, but when Animals Service Center staff heard Onyx’s heroic story they reached out to veterinarian Dr. Kevin Brumfield who took Onyx in and treated him and are raising the money to fund that treatment.

“Nobody plans to have something tragic like this happen,” said Dr. Cavell. “We’ve been really thrilled with the pouring in of support to try to help this family.”

Northwood Animal Hospital is accepting donations for Onyx’s treatment via a PayPal account or over the phone. The link for the PayPal account can be found here.

“We’re very thankful, he’s our hero,” said Myres fiancé Sierra Plair. “I’m just so happy that he’s getting the treatment that he needs and that he deserves.