Every week on his new CBS’ show  “Lucky Dog”, which premieres on Sept. 28, popular dog trainer Brandon McMillan visits a Los Angeles shelter and gives one lucky adoptable canine a second chance at a new life. 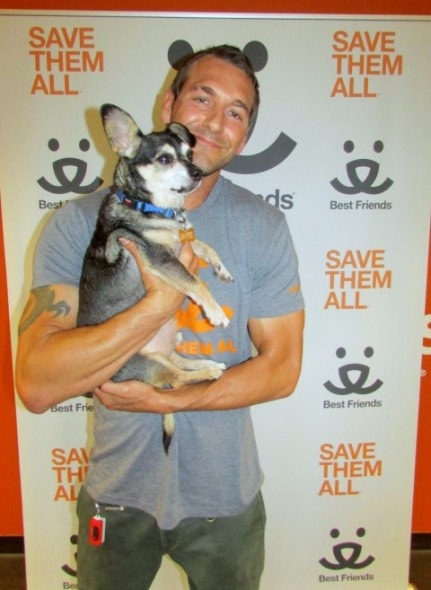 The “Lucky Dog” star also met with Marc Peralta, executive director of Best Friends Animal Society – Los Angeles and NKLA (No Kill Los Angeles), to discuss Best Friends’ new national call to action “Save Them All”, which focuses on ending the killing of 9,000 pets a day in America’s shelters.

“That number is unfathomable when you meet dogs like Thomas and Kennedy. Each would make a perfect family pet,” McMillan said. “Best Friends Animal Society is doing an incredible job in L.A. and across the country to showcase these amazing pets and give people the tools to Save Them All.”

“What Brandon’s doing on ‘Lucky Dog’ to promote the adoption of shelter dogs will go a long way towards educating the public on just how great these dogs are,” Peralta said.  “All animal lovers can play a huge role in helping us Save Them All by adopting their next pet, as well as by promoting spay/neuter of household and community pets.”

“Best Friends is leading the charge to make Los Angeles a no-kill city by 2017,” Peralta says. “Celebrities such as Brandon McMillan engage a wider audience that can help us Save Them All and we really appreciate that.”

Best Friends is the only national animal welfare organization focused exclusively on ending the killing of dogs and cats in America’s shelters.  An authority and leader in the no-kill movement since its founding in 1984, Best Friends runs the nation’s largest no-kill sanctuary for companion animals, as well as life-saving programs in partnership with rescue groups and shelters across the country, including Los Angeles. Since its founding, Best Friends has helped reduce the number of animals killed in shelters from 17 million per year to about 4 million. Best Friends has the knowledge, technical expertise and on-the-ground network to end the killing and Save Them All™.

For more information, including the 30 Things You Can Do to Save Them All, visit www.bestfriends.org/save

About NKLA
NKLA (No Kill Los Angeles) is a coalition of animal welfare organizations, city shelters and passionate individuals, led by Best Friends Animal Society. NKLA is dedicated to ending the killing of healthy and treatable pets in L.A. shelters by providing spay/neuter services where they are needed most so fewer animals go into shelters, and increasing adoptions through the combined efforts of the NKLA coalition so more animals come out of the shelters and go into new homes. In 2012, the coalition’s first year of existence, L.A. shelter deaths decreased 12 months in a row, culminating in 4,200 fewer animals killed than in the year prior. Also in 2012, the NKLA Coalition facilitated 23,421 adoptions and 4,458 spay/neuter surgeries were performed.