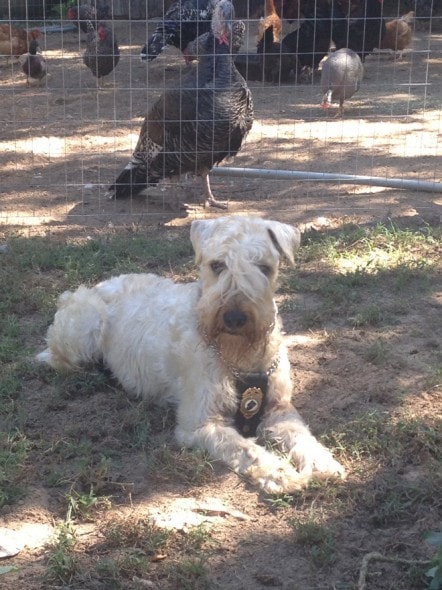 Bond and his handler Janell Mayberry helped rescue people after the devastating tornado in Moore, Oklahoma this year. Bond searched for hours, despite being tired and dirty. Bond is being honored for his efforts and will be receiving “The Wheaten Ambassador Award” this week.

Shortly after the tornado Mayberry and Bond, who is trained in search and rescue, arrived in Monroe to help. They were assigned to help at Plaza Tower Elementary. With the chaos and aftermath of the tornado they had to walk over a mile just to get to the school.

“He was tried, he was wet, he was muddy. He looked about 10 shades darker than what he was because of the mud,” said Mayberry.

Bond was determined in his efforts though. Even after his paws started to bleed Bond didn’t want to stop searching.

“He didn’t want to give up,” said Mayberry. “Even when I said that’s enough he just wanted to go and go and go.”

Sgt. Jeremy Lewis of the Moore Police credits Bond with helping them find a lot of people because he could search places first responders couldn’t get to.

“They’re awesome,” said Lewis of Bond and Mayberry. “She’s a great handler and he’s a cool dog. Yeah the work he did was great but he’s a cool dog, he’s cool looking and friendly and just a neat animal.”

Bond’s amazing efforts are being recognized by the Soft Coated Wheaten Terrier Club of America with the “Wheaten Ambassador of the Year Award.”