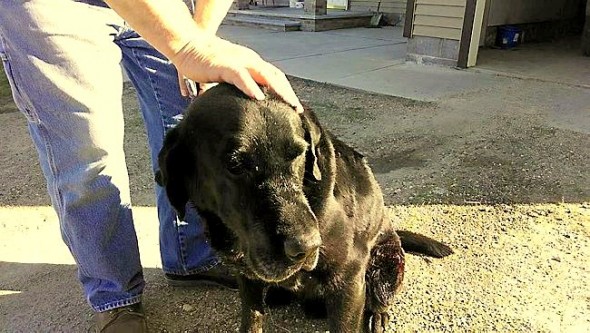 An eight-year-old black Lab named Toby died after heroically sacrificing himself to keep his family member from being attacked by a protective 300-pound mama bear who they had crossed paths with.

John Wacker of Minnesota says Toby was a smart and friendly dog, albeit a bit of an imp – he used to like to sneak out and play with the neighbor kids.  He says his dog could even talk.  But now he won’t hear him “speak up” anymore.

On May 21st, John’s son Chris had taken Toby out mushroom hunting.  They took a trail leading a few hundred yards from the house into an open meadow.  Chris had gathered a nice bagful of morel mushrooms when their trip went awry.

“I was getting them pretty good. I had a bagful,” he said.  “Then I heard something in the woods in front of us. I thought it was a man, standing by a tree, looking at us.”

Then he saw two bear cubs, making their way up a tree.

“At the same time, an adult male bear moved across one of our 1-acre food plots; we have a couple of them,” Chris said.  “I looked back, and the one bear was still standing there.”

Toby came up, looked at Chris and dove into the brush.  Minutes later, Toby was running back.  A 300-lb. bear was after him, moving at 25 mph.

“Toby stopped when he got to me and turned and faced right into the bear. It actually overran him and just kind of caught him in the hind end.”

Chris ended up on the ground, scrambling backwards.  The bear got a hold of Toby and slammed him around.  Miraculously, he made it back on to his feet and fled back to the house, 250 yards away.

“I’m not much of a running guy anymore,” Chris said. “I was just shot by the time I got to the house. I was seeing stars. I lost my hat, my mushrooms, my jacket. The next day I pulled a half-inch-long thorn out of my head. … It was just Mother Nature at her cruelest. It was really something else.”

“My son was really shaken. I’ve never seen him that shaken, and he’s been in the woods a lot,” John said.  “The bear I’ve seen with the cubs is huge. I’ve seen her going across the road.”

She has been causing numerous problems in the neighborhood – raiding birdfeeders and sheds, spooking horses and possibly killing a steer.  But as bears have less and less open territory to roam, coupled with a dearth of food, they are forced to seek food in residential areas.

“This bear has become brazen.  She’s aggressive.  She would have killed Chris. … Toby saved his life. I’m convinced of that,” John said.

“I’m pretty sure the bear didn’t have any interest in me,” Chris said.  “We just got in the wrong situation, with the cubs and a male bear and a female bear.  It was not a good place for a dog, especially a big black one.”

Ten minutes after the attack, Toby was home.  He had bite marks on his shoulder, and four to six inch puncture wounds from the bear’s claws.

“I should have put him down. I was brought up that way on the farm, but because of what he did to save Chris, Toby just needed to have a chance,” John said.

He took the dog to veterinarian Randall Lindemann.

“I didn’t know him, but by 11 p.m. that night, I had a whole lot of respect for him. He did everything he could to save Toby’s life,” John explained.

Toby stayed there for a few days, but didn’t make much of an improvement when he got home.

“He was drinking but not eating.  On Sunday evening, he took a turn for the worse.”

That Monday, Memorial Day, John had to work driving the bus for some students’ Memorial Day services.  When he got home, he knew Toby was at the end.

“I could tell Toby was going downhill. Every time he drank water, he was throwing up white foam. The vet dropped everything and met me at the clinic, on Memorial Day, too,” John said.  “I told my wife, I don’t think Toby’s gonna make it.  I could tell the spirit and life was going out of him when I left.”

He died the next morning.  The family buried him in the backyard.  John plans to put a concrete marker over the grave that will read, “Here lies Toby, the dog who saved my son.”