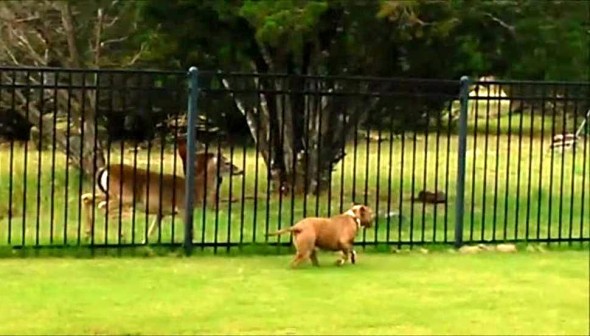 A rescue pit bull named Zeke has found himself a running partner – a deer!  Zeke normally prefers cuddling and snoozing to exercising, but now has a reason to get off the couch and go for a run.

This is a quote from Margaret Wray, the woman who uploaded the video:

“That deer came back a couple of times in the following days but they didn’t do as many laps. It’s the only deer we’ve ever seen play with him and I think she has moved on. This day, they had completed several runs before I realized I had my cell phone in my hand. Zeke is a recent rescue dog and loves to watch the wildlife wander through the backyard. He’s a love bug, a couch potato and that’s the most we have ever seen him move!”