Russ Chargualaf from Indianapolis, Ind., was at the right place and at the right time on April 30, 2014, to save a dog from drowning. The heroic man was taking a friend’s boat to gas up at the marina, when he heard a man screaming after a dog.

The canine ran along the rocks, went up to the Fall Creek Road bridge, was spooked by the traffic, and jumped off the bridge into the water. The dog was drowning, but Chargualaf was able to pull him out of the water and save its life.

In the chaos, the canine was disoriented and afraid. The dog struggled to keep its head above the water and when Chargualaf reached him, the poor dog was already submerged about a foot down. 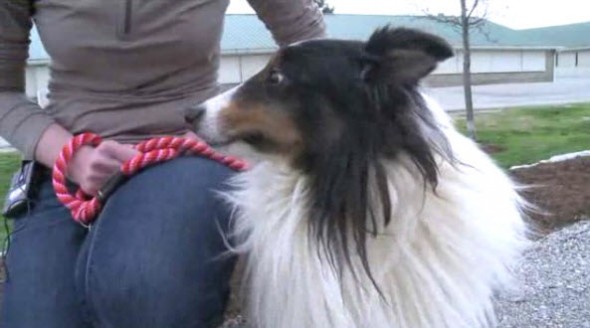 “The dog was just trying to swim, probably about a foot or so underneath the water, couldn’t get its head up,” Chargualaf told Fox News 59.

“I just pulled him straight (up) and then put him towards the back of the boat,” said the heroic man.

The Good Samaritan that informed Chargualaf of the dog in distress took the pet to the Humane Society for Hamilton County while the hero rescuer went to the hospital to get treatment for the dog bite wound.

At the Human Society, Medical Manager Laura Snyder said the dog is probably someone’s pet because he is in very good health. Unfortunately, the dog does not have a microchip so they haven’t been able to reunite him with his family.

The Humane Society hopes someone recognizes the dog and comes forward to claim him. He has been placed on hold for a week, but after that time, the pet will be made available for adoption.

As for Chargualaf, even though he got injured rescuing the dog, he does not regret being able to save the pet’s life.