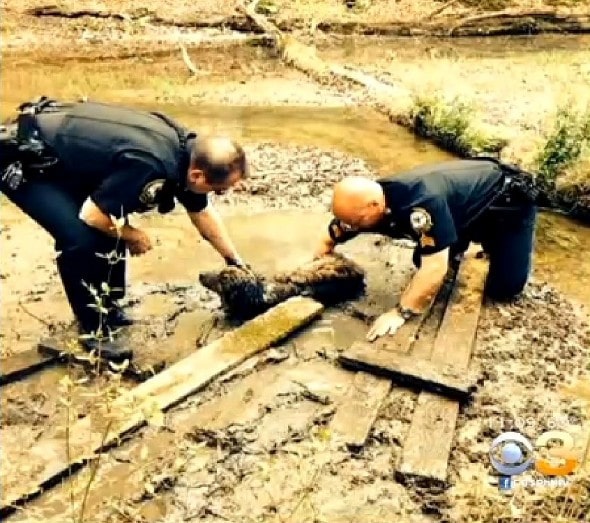 A couple of Pennsylvania police officers are being hailed as heroes for saving the life of a lost senior dog who was submerged, struggling to survive, in a mud pit up to his neck for nearly three days.  Pluto was mucky and sore, but was reunited with his family and will make a complete recovery.

“We just knew we had to get the dog out of there. It was in distress. It wasn’t really moving a whole lot,” Willistown Township Police Officer Mike Kushner said.

“It just followed us with its eyes, so it was exhausted,” Willistown Twp. Police Sgt Michael Martin said.

The officers had to use a few boards just to get to the Australian shepherd, who had been missing for over two days.

On the third day of the search, Shorr found her 13-year-old dog entrenched in a deep mud pit near a creek close to her home.

“It looked dire,” she said.

She believes he sank into the pit right after getting away from home, or else he would have come back right away.

Police were called to rescue the miserable dog, whose entire body had been immersed in the mud.

“I just pictured my own dog and what I would want somebody to do and that’s to go get it,” Kushner said.

It took all of their strength to pull Pluto from the enveloping muck, and when they did, it was unknown whether or not the dog would survive his ordeal.  But he did.  He has a limp and a few sores, but otherwise is recovering nicely.