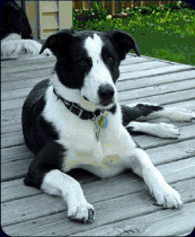 Eight years ago a border collie was found abandoned and tied up to the door of a shelter. That dog would find a home with psychiatrist Ralph Diner who named the border collie Hero, a name that would suit him well. Hero would become a famous therapy dog, even earning a presidential medal. On Saturday after years of helping other Hero passed away in Diner’s arms.

Like many abandoned dogs, Hero’s future looked bleak when he was first found. Left at the Huntington Count Humane Shelter, he didn’t have long to find a home before he would be euthanized. The staff at the shelter fell in love with the dog they named Bandit and were able to keep him until he found a spot with Border Collie Rescue.

At the same time California psychiatrist Ralph Diner was looking for a new therapy dog, his previous one had recently passed. When he saw a photo of Bandit on Border Collie Rescue’s website he knew he was the dog he wanted. 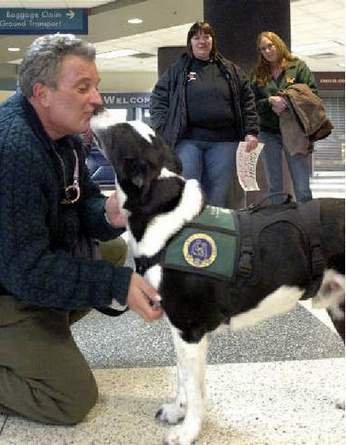 Bandit, renamed Hero by Diner, made a perfect fit working with Diner as a therapy dog. He would sit on the floor of Diner’s office during therapy sessions, but he didn’t only help inside the office.

“He was the hero of lost souls,” said Diner. “He had a special gift. He knew when to approach someone and when to stay away. He knew who didn’t want a dog around and when to lick someone’s hand.”

One time while visiting a nursing home Hero went up to a woman and put his head in her lap. The woman hadn’t spoken to anyone in four years, but as soon as Hero approached her she started talking to him.

Hero traveled all over to help heal. After the shooting at Virginia Tech Hero came to comfort and listen to the traumatized students and staff. Hero’s work became well known and he was written about in books and he was even awarded a presidential medal.

Age began to take its toll on Hero though. He ended up in a doggy wheelchair due to spinal problems. Hero was happy and pain free but on Saturday evening he passed away in Diner’s arms.

Diner is grateful for the time he had with Hero and noted that Hero is proof that you shouldn’t give up on dogs too fast. Hero almost never got the chance to live the life he did and help the hundreds of people he encountered.