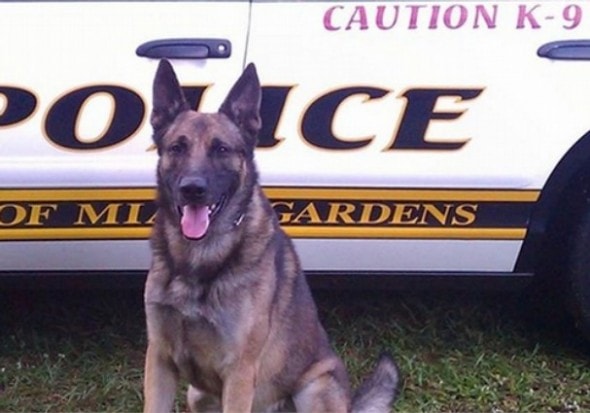 Over one hundred police officers throughout South Florida gathered on Wednesday to say goodbye to Max, a highly decorated police dog that was killed in the line of duty earlier this month.

Max and his handler responded to a burglary call on September 12th. While searching the scene a glass window panel fell on the back of Max’s head. He was rushed to the Hollywood Animal Hospital where he underwent emergency surgery. Unfortunately the injuries were too severe and Max did not survive.

Max joined the Miami Gardens police force in 2009 when he was only 13 months old. Over the past four years he has helped apprehend multiple suspects and had been trained as an explosives detection dog. He received the second highest level of explosives detection certification. His skill was integral in providing security at the Super Bowl, the NBA championships and two presidential visits.

Max’s handler, Chris Bezio, thanked the hundreds of officers and the many other police dogs that attended the ceremony. Bezio, like most handlers and their canine partners, had a strong bond with Max. The two lived and trained together and Bezio spent more time with Max than anyone else.

“Max you are in a better place now,” Bezio said through tears during the service. “You were called to heaven because they needed your services there. Do me proud and serve the Lord with honor until I join you once again.”