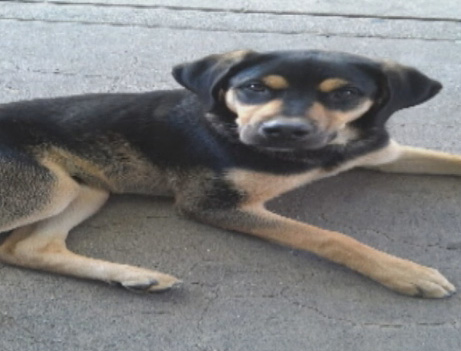 A man and his dog were reunited thanks to the help of a homeless man who found the missing dog and went above and beyond to get him home.

Teddy Tonne and his Rottweiler O.D. are snowbirds. They live in Alaska during the spring and summer, but in October they traveled to Tucson, Arizona to spend the winter. Usually the pair is inseparable, but on Saturday night O.D. ran away.

‘There was no way I could chase after him and that was it,” said Tonne, who was afraid he’d never see O.D. again.

O.D. was in trouble when he found himself swerving between cars. It was a busy night, but luckily O.D. found help. John Benvenga found O.D. and was determined to help find his family.

“I saw the tags and I saw he was from Alaska,” said Benvenga. “So I had no idea how he got down here. I thought maybe with some traveling kids or maybe with someone who just moved here.”

Benvenga is homeless, but he didn’t let his lack of resources deter him. He contacted local shelters but didn’t find any leads. So Benvenga went to his friend Lizzie Mead for help. Mead is an animal advocate and she quickly was on board with Benvenga’s mission to find O.D.’s family.

Mead posted pictures of O.D. on Facebook and it was quickly shared by thousands. Tips started coming in that helped Mead and Benvenga locate Tonne’s family in Alaska. They were able to get in contact with Tonne’s family who then contacted Tonne.

On Wednesday Tonne and O.D. were finally reunited.

“I don’t know what I would do without that dog,” said Tonne.