Roo was a rambunctious, out-of-control adolescent dog when she was found wandering in McClaren Park at just 11 months old. She was brought as a stray to San Francisco Animal Care and Control and then transferred to the San Francisco SPCA, where she nearly failed the behavior test… twice. When she finally got adopted she was quickly returned, only to be adopted and returned a second time. 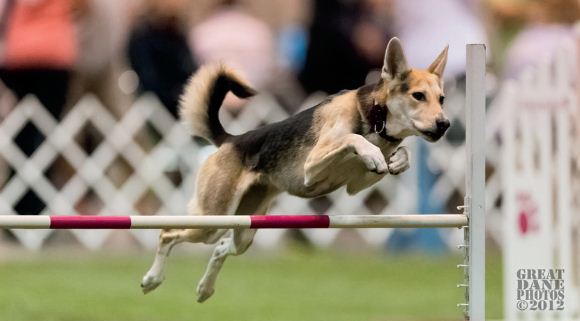 Stacey Campbell, San Francisco SPCA dog trainer and owner of Go Fetch Dog Training, had been looking for a new dog to train for competitive obedience when she met Roo. After watching Roo get adopted and returned the second time, she decided to open her home to the jumpy, hyper pup.

“Little did I know that a boisterous, big-eared, mixed-breed would steal my heart!” said Stacey. “As I watched Roo walk out of the shelter for the second time, I wondered if she was ‘the dog that got away.’ Fortunately for me, her second adopters found her a bit too mischievous and returned Roo to the shelter three weeks later.”

Stacey and Roo’s first six months together were not easy, and Stacey spent most of that time teaching basic house manners and obedience. Roo also had reactivity issues with other dogs while on-leash. And just when Roo started showing major improvements, she got attacked by another dog… twice. She wasn’t injured, but the attacks had a huge mental impact. Although she had already entered a couple of obedience competitions, she had to quit because her confidence was shattered.

Since Stacey teaches Agility classes at the SF SPCA, when Roo could no longer do obedience competitions she started teaching Roo agility work just for fun. At two and a half years old Roo was getting a late start compared to most agility dogs, but all of the running and jumping proved to be the perfect outlet for her abundance of energy.

After a year and a half of training, Roo started to truly stand out in the world of agility. In 2012 she  earned two Master Agility Champion Titles (MACH), which are given to dogs who demonstrate superior speed and consistency on agility courses.

In March 2012 Roo competed in her first national competition, the American Kennel Club Nationals in Reno, where in the finals she placed fifth out of the 88 dogs who entered.  By June 2012 Roo was ranked as the 2nd All American Dog in the country, which earned her an invitation to compete at the AKC Agility Invitational in Orlando Florida. In December, Roo won first place at this national event. 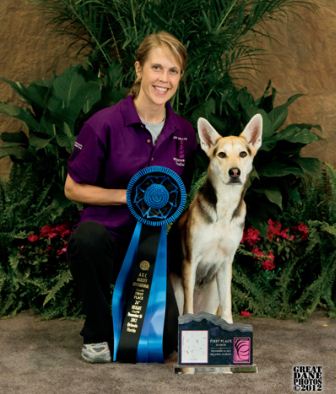 “I was so proud of her,” said Stacey. “I’ve always thought Roo was the coolest dog, so it was great for other people to see her shine.”

At the SF SPCA, we love hearing stories about our former shelter residents who have blossomed in their new lives. Roo is an outstanding example of how an animal with behavioral issues can thrive with the right teachings and a dedicated guardian.

Reprinted from the SF SPCA’s Our Animals, Spring 2013